The first two episodes of King’s Quest have brought two unique stories pulled from the memory of the elderly King Graham. The first episode revolved around a Knight’s tourney and was filled with puzzles and classic adventure game tropes. Episode two switched things up by dropping Graham in a goblin prison and tasked him with managing the health of his fellow inmates while also conspiring to escape. Therefore it should come as no surprise that Episode 3, Once Upon a Climb, also manages to switch up the formula once again.

Unlike pretty much every other story-driven adventure game out there, King’s Quest is not telling a linear tale. The perspective of the sickly King Graham regaling his granddaughter in his younger adventures allows the plot to jump from place to place within his reign. Episode three reimagines the events of King’s Quest 2, wherein he rescues his future wife Valenice from a mysterious tower. 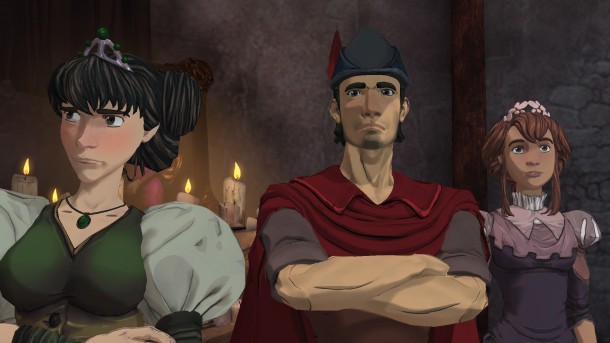 Once Upon a Climb has a significantly different tone than the previous two, dealing with Graham as he discovers that love is much more than just bravely rescuing a damsel in distress. Upon scaling the tower Graham is quick to discover that things are much more complicated than he imagined. Instead of one, he finds two princesses locked away inside and discovers, with plenty of awkwardness, that neither is prepared to accept his marriage proposal simply for attempting to rescue them. In addition Graham finds himself trapped by the same mystical spell imprisoning the princesses, with only “true love” being able to break the spell.

Thus begins a truly enjoyable episode where Graham discovers what love is truly about. The smart thing that Once Upon a Climb does is that it makes both princesses much more than just boring damsels in distress. Both are strong characters, with likes and dislikes and plenty of personality. The game literally asks you questions to help match you up with a princess but also offers you opportunity to aim your heart in the direction of your choosing. The game also makes both princesses so likeable and unique that it will be difficult to decide which one you truly want to pursue.

Midway through the episode you are given the chance to go on a forced errand with each princess that basically doubles as a date. These sequences really shine as you witness the heart and beauty found within each princess. The sequences also offer a variety of gameplay options with parts that test your wit, reflexes and creativity. By the end of the episode I was delighted to see that the game neglects to give you a boring “who do you want to pick” choice and instead naturally progresses with the princess that you have been leaning towards so far.

The thing that is most impressive about Once Upon a Climb is just how natural it makes the process of falling in love. It’s not a topic that games delve into very often but I have no hesitation in saying that this is by far the best I have ever seen it tackled in a game. It handles the concept of love without losing the silliness and humor that has become so endearing in this series – both princesses get ample opportunity to show their goofiness. The entire experience is simply heartwarming, culminating with a return to present time to witness a touching moment between elderly Graham and Valenice. Let’s just say that I might have gotten a very small speck of dust in my eye during this part. Just a little.

Episode 3 also starts to hint at a grander throughline than we’ve seen in any of episodes so far. The friend-turned-nemesis Manny (played by Wallace Shawn) returns in a minor scene that is clearly hinting at things to come, even getting a slight cliffhanger to end the episode. It will be interesting to see what they do with this plotline, especially since the first three episodes have stood pretty well as unique vignettes without a real overarching plot besides watching Graham become a good king.

Once Upon a Climb is the best episode to come from the King’s Quest reboot so far. It takes the cheerful style and classical gameplay and throws in a heapful of heart and feeling. It’s not common for a videogame to deal with love in any form but the subtle, natural way that King’s Quest approaches the subject is simply refreshing. Once again the series shows that not only can it survive in a genre dominated by Telltale but that it can stand very much on its own as something special.

A code of King’s Quest: Episode 3 – Once Upon A Climb was provided to Pixel Related for review.