Aban Hawkins is the son of a famous archeologist. Neglected and insulted by his father, he decides to leave home and never return. However, when his father disappears, he discovers that his father was searching for a vast sum of treasure. He chooses to try to find the treasure, to prove that he’s better than his father. Thus begins 1001 Spikes, not with joy or hope, but with spite, which seems fitting once you play the game.

1001 Spikes is an “enhanced” remake of Aban Hawkins and the 1000 Spikes, which was released on the Xbox Live Indie Arcade in 2011. It was certainly one of the best, and most challenging games released on the service. The game has gotten a slight visual makeover, but there are a number of additions that make it a great value.

For the uninitiated, 1001 Spikes puts you in various temples, trying to make it past traps, death pits and monsters to find treasure. Each level is set in a different portion of a temple. At the end of each area, you collect a piece of treasure, usually giving you a number of extra lives.

When you first start the game, you’ll immediately realize that this game is one of THOSE types of platformers. Yes, 1001 Spikes is one of those super difficult platfomers that will require you to play levels repeatedly. You start the game with 999 lives and you can easily lose almost 100 of those within the first temple. 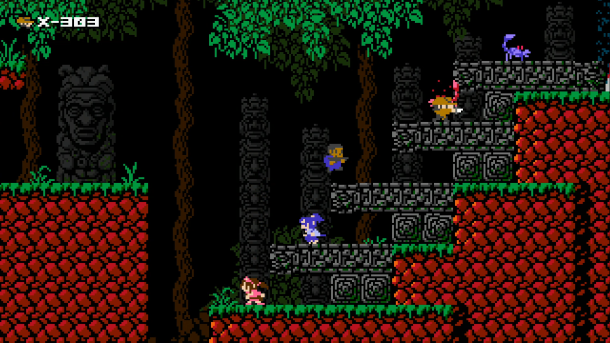 Each level is, essentially, a puzzle. There are a ton of “cheap” death traps, and discovering them, and subsequently figuring out how to get past them is the challenge. Each level doesn’t necessarily require you to have lightning fast reflexes, but rather to knowledge to think of creative ways that the designers want to kill you. Do you need to use a floating platform to bridge a gap? There’s probably a spike trap there. Is there a single spot on the floor where there aren’t any spikes? You’ll probably trigger a spike trap by jumping on it.

There’s almost a sick joy in discovering all of the creative ways that Aban can be killed. There’s a moment fairly early in the game where you find a single safe haven in a sea of spikes. Then, as soon as you jump on it, you see the spikes kill Aban. From this moment on, you realize that you almost need to go against your instincts. You need to be paranoid of every single thing in the environment.

Then, you’ll become determined. You’ll die on a level fifty times. You’ll get angry at the game, but you’ll feel the need to endure. Each time you die, you learn something new. You feel the spite that Aban feels towards his father and in that moment, you’ll feel the same drive as Aban does. Either that, or you’ll quit and never play the game again.

For those who’ve already played 1000 Spikes, you may wonder why this port is worth picking up. Well, for one, there are a number of new levels added to the game. The game has also added a number of new characters added to the game from other difficult platformers. These characters each make the game play slightly different. Commander Video, from the Bit.Trip series, is slightly more floaty, allowing you to make larger jumps. However, while other games that have these sorts of “guest” characters just throw them into the level, 1001 Spikes actually adds a full story for why they are in the world of Aban Hawkins. It’s a small touch, but it shows a lot of care being put into making 1001 Spikes much more than just a simple port.

1001 Spikes is one of the best, challenging platformers to come out since Super Meat Boy. There’s a ton of care put into the game and the new content makes it well worth the asking price. It’s incredibly difficult, and many players will get extremely frustrated. If you can get past the frustration, though, you’ll find a deep level of satisfaction in beating levels, which is more than many other platformers can say.

A code for 1001 Spikes was provided to Pixel Related for review.