It would be understandable if the first thing you thought of when looking at Rehtona (which is Another backwards..get it?) was last year’s indie hit Celeste. Pixel art graphics, a female protagonist and platforming? That sure sounds familiar. Well, in reality Rehtona is essentially the polar opposite in every other way. Instead of breakneck, twitch-based platforming, Rehtona is first and foremost a puzzle game, closer resembling something like Braid.

Rehtona is a game that is stylistically impressive but the story, unfortunately, doesn’t really do much to explain the cool designs or world you explore. You start out as an ordinary girl visiting town, which you arrive at via a giant, mechanical eagle…for some unexplained reason. Then you get transported to a darker, alternate reality and find yourself able to use special doors to be able move between your world and the dark world. You travel throughout 32 levels, collecting literal puzzle pieces to complete small pictures that unlock weird story sequences that seem to hint at some sort of world creation, implying that you maybe were a god in a previous life? Honestly the story is so abstract and weird that I eventually stopped caring and just progressed forward.

Besides, the reason you’re here playing Rehtona isn’t for the story; it’s for the puzzle-solving gameplay, which I found to be very smartly designed and features just the right pace of figuring out the current mechanics before new ones are introduced. The spark of what makes Rehtona’s puzzles unique is the cause and effect of transporting between both light and dark worlds. In each level your first step is to get a key, which unlocks the door to the dark world. Then you snatch the puzzle piece and make it back to your trusty robot eagle to complete the level. It sounds basic but the levels get very deep with mechanics layered upon mechanics as you progress through the story. 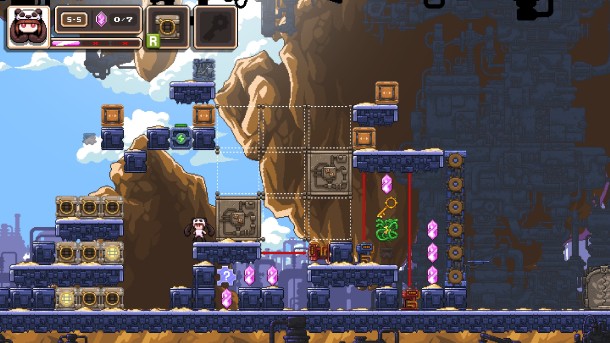 It starts out simple, tasking you to move blocks around to help you jump to higher platforms or block deadly lasers. The level morphs when you travel to the dark world but in such a way that you can easily see and plan for. Normal blocks will hold their place in both worlds while broken blocks will waste away and disappear in the dark world. New platforms will appear in the dark world, but you can see where these will appear, as they are greyed out silhouettes in the light world. You can freely use the door to transport between light and dark once it’s unlocked so oftentimes solving a level sees you bouncing back and forth between both, setting up something in one world to help in the other.

The true creativity in puzzle solving comes from Rehtona’s ability to create copies of herself that hover in a specific spot. These have no effect in the light world but become static stone blocks in the dark world, able to hold down buttons, block lasers, create bridges or sometimes just a platform to reach a higher section. You have limited uses of this ability and once you put it down and it can’t be picked up and moved again, unless you rewind time, that is. Instead of forcing you to just restart the level if you mess up, you can always rewind back to before your previous action. This has no gameplay effect like in something like Braid, instead it’s basically an undo button, as there will be many times you will move something wrong or get yourself stuck and need to go back. You can even go back through every action, all the way to the beginning if you need to.

I found the puzzles in Rehtona to be delightful and just the right difficulty. You’ll get that great “Aha!” feeling of solving a complex puzzle but never feel like it’s too complicated. This is aided by every level having a little hint before you load that doesn’t give anything away but mostly just points you in the right direction, like “Sometimes you need to stack boxes on top of each other.” My only complaint with the game is that everything outside of the puzzles are instantly forgettable. The story is so abstract that even after seeing the normal ending and the “true” ending, I had basically no idea what the game was trying to say. Still you have an interesting puzzle game that will offer you a solid 4-5 hours of gameplay with enough new ideas to keep it fresh throughout.

A code for Rehtona was provided to Pixel Related for Review.