Procedurally generated games are definitely one of the more popular trends, and for good reason. Often featuring roguelite elements, they provide seemingly endless replayability and often offer additional challenges such as speed run modes, daily seed leaderboards and more. Songbringer attempts to bring procedural generation to the classic gameplay style of The Legend of Zelda. The result, however, is a game that doesn’t deliver on the promise of its rogue-lite roots nor give a compelling reason to revisit its procedurally generated world over and over again.

In Songbringer you are Roq, a spacefaring man who wakes up on a strange planet, shirtless after his vehicle was shot down by lightning while trying to land. A crew member of the spaceship Songbringer, he must recover from temporary memory loss to uncover his mission as well as uncovering the secrets of the mysterious planet he finds himself on.

Songbringer presents a beautiful, pixel art world. The cutscenes and visual design harken back to classic, old school adventure games with basic models and large pixels. Animation is simple but great weather affects and lighting helps bring the world alive. The design of the world features woods, deserts and the like while also mashed up with the feeling ancient technology from a past civilization.

The entire game is presented from classic, ¾ top down perspective. The world map is divided into blocks that transition as you hit the edge of the screen. You know, just like Zelda. There are shops, secrets and the occasional NPC scattered about the overworld but usually it is just a way to get from dungeon to dungeon, where the real meat of the game is found. 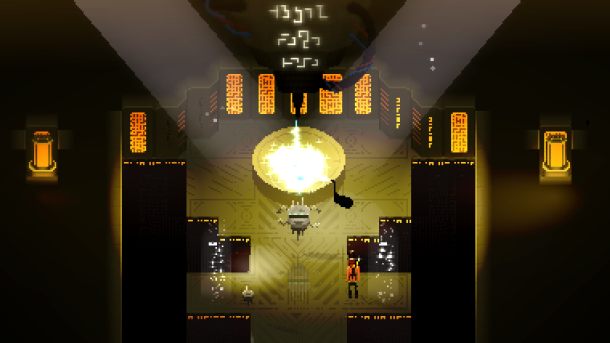 There are ten dungeons in the game, none of which are too complex or take very long to complete. Each dungeon offers a new item of some sort which is usually used both for combat and puzzle solving. However, Songbringer leans much heavier on combat than puzzle solving, as usually puzzle solving only goes as deep as moving a block or having the right item to clear a path to the next room. The dungeon ends with a boss battle and a “tooth piece” (read: heart container) but the bosses offer little in the terms of mechanics; usually you just hit them with your sword until they are dead.

Combat overall works good enough but I found it to feel a little loose at times, even after a Combat Precision patch. In Zelda, you always knew exactly where to hit enemies and where your sword would hit when you swing it. In Songbringer, the lack of such precision is usually just replaced with rooms full of enemies where you just swing your blade like crazy until everything is dead. It is still fun but it feels like a situation where less could have been more.

The real disappointment in Songbringer is the aforementioned procedural generation. When you start a new game, you are asked for a word. This is where the seed for your game world is generated from. This could potentially lead to cool things like sharing potentially cool seeds or something like competitive speed running with everyone using the same seed. However, the world that is created fails to impress me.

In the overworld I often found routes that ended in dead ends with nothing to uncover. No secret, no dungeon, no shop, just an empty dead end. The world is always the same overall size so it feels to me that it was just filling in holes but didn’t have anything interesting to put there. The other problem is that, despite being procedurally generated, the worlds feel too similar to one another. Going back in for a second playthrough with a different seed, I ended in a first dungeon that, while having a different map arrangement, still had the same item to unlock and the same first boss to defeat. I didn’t continue further than that, mostly because I saw little reason to do so. 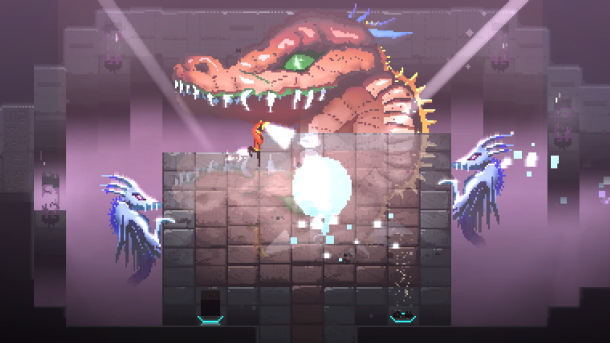 Songbringer feels like a game stuck between two styles and does neither to success. On one hand, you have a well-done Zelda clone with good, but not great combat that just can’t deliver the same type of puzzle and overworld complexity, likely due to the randomized world. On the other hand, it doesn’t really deliver on the roguelite elements. There is a permadeath mode and a speed running mode but the main mode has you playing just like any normal game, where the procedural generation doesn’t really matter all that much. It’s still an enjoyable game to see through to the end but it seems like it could have been so much more if it had stuck to either play style.

A review code for Songbringer was provided to Pixel Related for review.