Looking at West of Loathing, the game probably doesn’t look like much. Let’s be honest here: the entire game is comprised of black and white, stick figure graphics. While it’s true the game’s aesthetic is simple, diving into West of Loathing reveals fun gameplay and a cleverly written, and often hilarious, tale of the Wild West.

In West of Loathing’s crazy version of the Wild West it’s apparent right from the beginning that you are in for a weird ride. “Nothing’s been the same since the cows came home,” is the early sentiment you hear in the game. This twist on the common phrase is referring to a literal herd of demonic cows who burn and slaughter the citizens in West of Loathing. That’s only the beginning of a journey that will feature goblins, crazy cultists, a jelly bean museum, a haunted pickle factory and much, much more.

Yes, the game is constructed completely in stick figures but that by no means it is an ugly game. In fact, the animation of said stick figures is really well done and the design of the entire world is varied and well built, much more than you would expect from such a simple aesthetic. There is also some fantastic lighting going on in the various caves and mines you explore through the game, with shadows that react to your light as you walk through the environment that look beautiful. It may not look great in simple screenshots but in motion the game is quite nice. 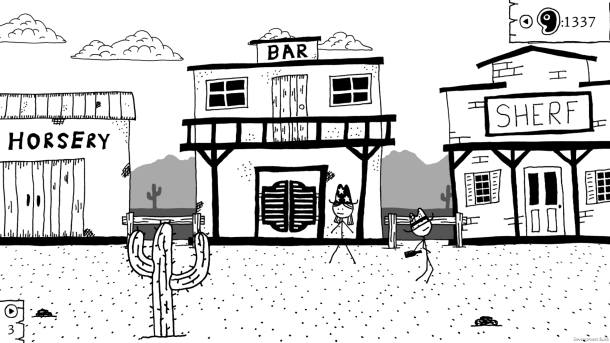 The true gem of West of Loathing is the writing and throughout the entire experience it is incredibly entertaining. There’s no voice acting but the text conversations feature good portions of wackiness and dry humor that almost always works well. Some are well crafted, extended sequences that are amusing while other parts are small snippets that you may not even notice. For example, in the settings you can turn on “Colorblind Mode” with the feature text of “Just in Case,” despite almost no color existing in the entire game. My favorite recurring joke revolves around the spittoons found in each saloon and the game’s admonishments if you choose to search them for items.

West of Loathing’s actual gameplay consists of straightforward RPG mechanics that is very enjoyable. Oddly enough it most compares to another hilarious game: South Park: The Stick of Truth. You fight turn-based battles against the various foes in the game, accompanied by a single companion who is mostly there for support. The game is surprisingly deep as far as stats, bonuses and leveling up.

The items and stat bonuses you get through the game are amazingly deep and laced with humor. There are tons of items to equip as well as an entire system based around using consumable items to give yourself temporary bonuses that will be lost if you die too many times. The flavor text on these items is often amusing – West of Loathing is the type of game where it’s always worthwhile to read everything that you can. There are also a variety of permanent bonuses that you acquire through various means, usually in some kind of silly way. For example, every time you walk into a cactus the game pops up a “Ouch” text box, which by itself if fun. Do that enough times and you’ll earn the “Mostly Scabs” perk which gives you 5 bonus health.

In true RPG fashion, your stats and abilities feature not just in combat but in roaming the world and completing quests. Often there are multiple ways to complete a given task. For example, you might run into a group of snakes that you will have to fight to get past, but if you have enough Muscle you might be able to knock over some rocks, killing them instantly and avoiding the fight. You also have abilities that will allow you to interact with the world in different ways, such as learning to crack safes, forage for plants or intimidate people.

The goal of playing West of Loathing is, simply, to head West. There are three main areas of the game after a decently long tutorial area. Each area has a ton of side quests to complete and you will generally want to complete everything you can, both because they are incredibly entertaining as well as a means of leveling up and getting stronger. Nothing is locked out when you progress in the story so you can easily go back and finish things up in past areas if you want.

Like any true RPG, the side quests are where the bulk of the enjoyment is going to come from. These are varied, some being simple fetch quests while others are multi-tiered quest lines. In addition to just combat there is a decent amount of adventure-game style puzzles to figure out, where you might need a certain item to progress further on a quest-line. With so much to do and the open-ended nature of the world you can easily move on to something else and come back when you’ve found what you needed. Surprisingly there isn’t any kind of in-game quest log. Instead you talk to your companion, who will give you info about the main quest and remind you of various side quests you haven’t completed. With the dozens of quests and locations found in the game it can be hard to keep track of exactly what you’re doing on some of those side missions and simple reminders your companion gives you often isn’t quite enough.

West of Loathing is fairly short, at least by RPG standards, coming in around 6-8 hours, depending on how many side quests you try to complete. I was very disappointed in the third and final main area, which is significantly shorter and simpler than the first two areas or even the tutorial area. I finished the final area in around a half an hour, with the previous two areas taking about three hours each. The final plot line comes of nowhere and wraps up far too quickly. You can go back and finish up stuff after seeing the ending but it was definitely a disappointment.

With the shorter run-time, the game luckily is ideal for being played multiple times. There are three different character classes, four horses and at least three different companions that can join you on your journey. The companion you choose in the prologue has their own side-story that is actually more compelling than the main plot. I have already started a second playthrough with a different companion and class. While almost all of the side quests are the same, the combat is changed significantly and having a different companion will lead to an entirely new plotline. My first playthrough focused on fighting an evil Necromancer who is raising the dead, while my second is so far focusing on the demonic cow invasion, which naturally is quite interesting.

West of Loathing is a game that almost nails everything perfectly. I say all the time that comedy is hard, especially in video games, but the clever writing makes almost every joke and funny situation work perfectly. The simplistic graphics fit the style of the game quite well and lend to the overall charm of the game nicely. On top of simply being funny the game offers fun combat and plenty of RPG systems to make you feel like you are truly building a character shaped by his experiences. The only knocks against West of Loathing is the bland main story line and the major let down of the final area. Luckily the side content is entertaining and varied enough that West of Loathing is still easy to recommend.

A code for West of Loathing was provided to Pixel Related for review.