In my more recent years of gaming, I’ve found the idea of playing games that are less about completing a story and more about a series of never-ending tasks to be more appealing. Something like American Truck Simulator is more exciting to me than the next Assassin’s Creed game. While these kinds of games are relaxing, every so often I crave a bit more excitement in them. Rebel Galaxy provides a near perfect blend of the relaxation elements of a Euro Truck Simulator with the action of the high sea parts of Assassin’s Creed: Black Flag.

Rebel Galaxy puts you in the role of a space pilot who is given a ship by your aunt. She gives you a vague hint that she’s involved in something nasty and needs your help. It’s a pretty light story that tries to create an expanded universe for the story. Unfortunately, this galaxy could use a little bit more expansion in future iterations, as alliances and characters aren’t given much plot to them.

Yet, with the story being as light as it is, the rest of the game holds its weight. You explore space but not in a traditional space sim way. Rather than the game being something like Elite: Dangerous (where you have full 3D controls), your ship travels on a horizontal plane, similar to how a ship travels in the ocean. Each of the games solar systems have a full set of planets, bases and asteroid fields to explore.

How you play ends up being your choice. While initially you will end up taking contracts to kill rebels or collect dead drops in the system, eventually you can choose how you want to play. You can play as an explorer, mapping out each system, though this won’t net you much cash. You can be a miner, travelling between asteroid fields and mine asteroids to sell commodities back to certain stations. Or you can play as a space pirate, holding up traders throughout the galaxy and killing anyone who gets in your way.

The thing is, each choice feels valid and there really isn’t a wrong way to play. While your main goal is to get money, there are a number of options on how to do it. Plus, each way feels fleshed out in a large way. If you choose to be a miner, you’ll need to have a lot of patience, because each space station has a commodity market with fluctuating values. If you choose to be a mercenary, you will want to watch out for your alliances as if you do the wrong thing, you are going to piss off a lot of people.

Of course, all of this is in service of getting paid, which is a huge component to the game. As you get money, you will be able to buy a variety of upgrades to your ship. These are things like new shields, a new hull, different weapons and a variety of upgrades for other components. Eventually, you can even buy new ships that will allow you to take on more difficult missions.

The actual combat loop of the game can range from being really stressful and exciting to being more of a nuisance. Your ship is equipped with multiple weapons, which you can set to auto-target enemies. This is extremely helpful, as your main weapon is broadside cannons. Holding down a trigger to charge and aim your broadsides, while your lasers and torpedoes fire off at a field of enemies is incredibly fun.

Yet, often times when you are using your warp drive, a way to travel at high speeds throughout the system, you will run into a field of generally easy enemies. However, if they are in your path, you will be taken out of warp to fight them off. More often than not, it’s easier just to run from the fight. Not because they are difficult, but because it is faster to run away and re-enter warp than it is to kill them. 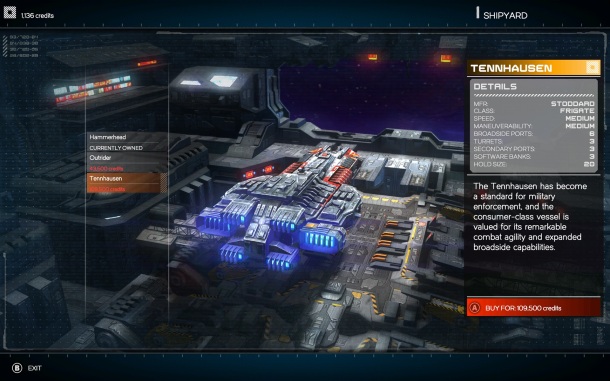 Honestly, Rebel Galaxy is easy to just get lost in. You can just choose to take a bunch of missions, or you can go to an asteroid field mine until your make your fortune. There are so many options and just exploring the galaxy is a real joy. The fact that there are all of these really well fleshed out options make it a very easy game to pick up and play.

A code for Rebel Galaxy was provided to Pixel Related for review.