There’s little getting around the controversy that surrounded Dragon’s Crown when it first released. After initial screenshots and videos revealed the exaggerated character style, there was some criticism that the game was exclusionary towards females, as the female models were generally more sexualized than their male counterparts. That art style is still there, but if you can get beyond the character art, you’ll find a decent brawler that can be a lot of fun to play with others.

The narrative is pretty generic for these kinds of games, and Dragon’s Crown is no different. You play an adventurer seeking adventure so you adventure to get some adventure. It’s pretty straightforward, using a lot of tropes to create a pretty cohesive world.

You take various quests to grind out experience, weapons, and also to gather the bones of other adventurers, whom you can bring back to life to join in your adventures. As you play, the obvious point of reference for most players will be the the Golden Axe series. You brawl your way through stages so that you can brawl some more. 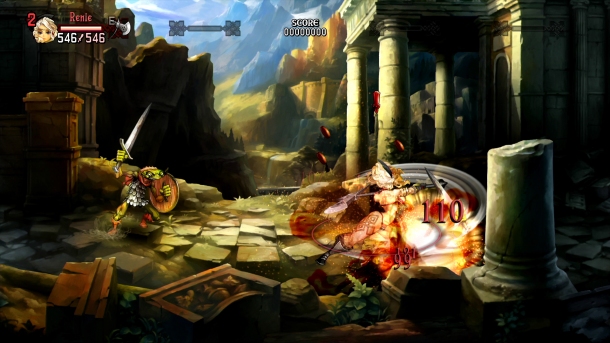 In and of itself, Dragon’s Crown certainly isn’t a bad game. However, there are some pretty heavy caveats that come with playing it. The first is that Dragon’s Crown is best played multiplayer. While you can resurrect other players to act as AI players, the AI isn’t especially intelligent and oftentimes, characters with low health won’t take healing food, while the characters with nearly full health will take food to heal themselves. Sometimes the AI will simply stand back and not attack anything and in missions where you have to protect specific characters, they’ll abandon the characters you need to protect and just kinda sit there.

On the flip side, playing with other players is a lot of fun and each character has different abilities that compliment each other. Hacking and slashing is just a lot of fun with multiple people. However, if you’re team consists of multiple players using the same character (or an AI player using the same character), it can be incredibly difficult to distinguish between characters, even if they are colored differently.

This is not helped by the art style. Personally, I don’t really care what the character models look like. That’s an entirely subjective thing and if you don’t enjoy the models or take issue with them, that’s understandable. However, the big issue that I found with the art was more that the art was often really busy. There’s a lot going on in each animation and with multiple players doing multiple large attacks, it can be really tough to distinguish your characters in a brawl.

Dragon’s Crown Pro offers you a fully 4K upgrade to the art. If you’ve already played on the PS3 or the Vita, you also have cross-save functionality so if you’re really devoted to replaying Dragon’s Crown, Pro is the best way to go.

Years removed from the original controversy, it’s really easy to see why people weren’t into the art style and honestly, there are some legitimate reasons to not enjoy the art. However, if you like the art, you’ll find a pretty decent multiplayer brawler. Just avoid playing it solo at all costs.

A code for Dragon’s Crown Pro was provided to Pixel Related for review.