You know what’s crazy? Someone actually made a sequel to 1995’s Robin William’s-starring Jumanji. Did you know that? That hot new Dwayne Johnson, Kevin Hart, Jack Black and Karen Gillen movie is a literal sequel to a movie over 22 years old. To put it into perspective: Kevin Hart’s first accredited role is in 2001, Jack Black hadn’t broken out yet, only doing small roles in movies like Dead Man Walking, Waterworld and Demolition Man, Dwayne Johnson had yet to debut in the WWF and Karen Gillen was only 8 years old.

All that being said, everything about Jumanji: Welcome to the Jungle is completely different than that original movie. Shortly after the events of the first movie, the magical Jumanji board game finds itself with a new owner. This teenager, however, finds board games boring and so the game transforms itself into a video game, capturing the teen’s attention and trapping him inside. Fast forward 20 years later (apparently the board game only needs to capture children every few decades) and a group of high school stereotypes finds themselves in detention, stuck cleaning out a basement. They come across Jumanji and the next thing they know they are sucked into the game.

This is the point in which the movie really kicks off. The stereotypical teens are transplanted into the bodies against their real-world type. The scrawny kid is Dwayne Johnson, the shy girl is provocatively dressed Karen Gillen, the star athlete becomes Kevin Hart and the popular girl becomes Jack Black. I like all four of these actors in varying degrees and they work well as a group to sell the silly idea of being sucked into a video game. 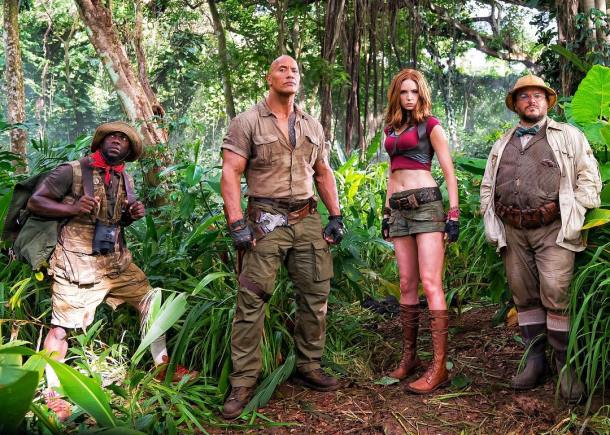 Jumanji: Welcome to the Jungle is a seriously funny movie, with most of the best stuff coming from Jack Black and Dwayne Johnson. Jack Black is especially funny portraying the popular girl suddenly stuck in the body of an “overweight, middle-aged man.” Him fawning over the pure manliness of Dwayne Johnson – aka Dr. Smolder Bravestone – is particularly hilarious, especially when compounded with Dwayne Johnson acting against type and being nervous, unsure and insecure.

Karen Gillen also gets some nice time to shine, commenting on the ridiculousness of her Lara Croft-inspired wardrobe and getting a quick lesson in flirting from Jack Black (naturally). Alongside with Dwayne Johnson she also gets to do a good amount of ass-kicking. Kevin Hart, on the other hand, is basically just being Kevin Hart. That’s not a bad thing, I still find him funny, it just doesn’t stand out as much as the other three.

The journey the group finds themselves is straightforward (again, it is mimicking a video game). There are a variety of set pieces (levels) and the different ways they play with the videogame elements is pretty funny, from the way the lives work to in-game NPCs. The main bad guy (Bobby Cannavale) is there simple to be a schlocky menace and its fine for what little he has to do in the movie. There’s another character introduced midway through the movie who I won’t spoil but he, too, is given very little to do.

All of that being said Jumanji: Welcome to the Jungle is still very easy to recommend. It’s a hilarious action comedy viewed through a video game world with funny characters who don’t know how to inhabit the over-the-top bodies they find themselves in. The bookends of the “real world” teenagers are plain and uninteresting but once the movie drops you into the video game and you get the real stars, it shines all the way until the end, except for the expected return to said boring teenagers.

One thought on “Jumanji: Welcome to the Jungle – Kyle’s Mini Movie Review”