One of the most fun things to be in a game is a magic user. It’s generally been my preferred way of playing games, whether you’re tackling the College of Winterhold in Skyrim or slinging biotics in Mass Effect. With Mages of Mystralia the focus is purely on magic, with a fun twist: you need to create the spells from scratch. That unique hook combined with fun combat and great puzzles results in a charming look at spellcraft and mages.

In Mages of Mystralia you are Zia, a young girl who suddenly discovers her magical abilities when she burns down her home. In Mystralia, magic is outlawed and mages are hunted down and executed. Zia runs for her life and is fortunately rescued by one of the last remaining mages, who takes her to the last enclave of mages to begin her proper training. The world of Mystralia is steeped in lore about the time before magic was outlawed, the kings of the past, a Troll plague and much more.

The odd thing about Mystralia is that, despite such seemingly dark story beats, it is actually lighthearted and bright. In fact, most of the story fails to land at all because of the aesthetic and style of the game and characters. Horrific events such as the destruction of a small village and the murder of a noble never receive the gravitas you would expect. The game’s opening, where you burned down your house and killed your uncle, is never dealt with. In fact, the townsfolk accept you back with only a little trepidation, not the fear or violence you would expect. There’s even a major twist later in the game – although it is telegraphed very early – that is seemingly swept aside and ignored by all of the main characters.

With this lack of seriousness surrounding the tale, Mages of Mystralia never delivers an interesting story or characters. The path of Zia learning to become a mage is fairly cookie-cutter. Being naturally gifted she is, for some reason, given the utmost important tasks to try to save the world rather than any of the other, more experienced mages. Being instructed to go places by the mages mostly feels like an excuse to get you from place to place. New characters will be introduced along the way with little to no fanfare and then generally never be seen again. Your mentor, the mage who rescues you at the beginning of the game, disappears for long periods of the game before showing back up suddenly at the end. The ending has you facing off against the big baddie but no relationship is built up with this person so there’s no real reason to care. The game even ends on a cliffhanger, leaving you ultimately unfulfilled.

Deficiencies in the story aside, Mages of Mystralia is all about how it plays. This is where Mystralia excels. Where most games hand you the spells and abilities you need to perform magic, Mages of Mystralia delivers a different challenge. It gives you the building blocks of spells and tasks you with creating your own from scratch. You get four base spells that you can manipulate with runes. For example, you start out with Actus, which creates a static ball of fire in front of you, but when you combine that with a Move rune, suddenly you have a fireball. That same Move rune combined with Ego, which contains self-oriented spells, will create a dash. This is just the first step of spellcrafting that will eventually include mirror shields, homing fireballs that explode on impact and stone copies of yourself.

Crafting spells is clearly the main hook of Mages of Mystralia and there is plenty of complexity and depth to explore and experiment with. You’ll need to craft offensive and defensive spells to help take down the large amounts of enemies you’ll face. The game does a good job of mixing up enemies, forcing you to switch spells and tactics based on who you are facing. Near the end of the game Mages of Mystralia also takes great pleasure in tossing a bunch of enemies at you in multi-layered combat trials, which never get too difficult but do give you a great opportunity to try out different spells.

Unfortunately, the combat does suffer slightly when the game tosses tons of enemies at you. As a mage, Zia is weak when it comes to actually receiving damage and if there is a healing spell I never discovered it. The result is that many combat encounters devolve into kiting enemies and blasting them with spells until they get too close and then kiting some more while your mana recharges. It doesn’t bother me too much – it’s still fun – but I do wish the game offered some more creative combat scenarios than just large rooms with tons of different enemies.

Mages of Mystralia is clearly heavily inspired by The Legend of Zelda series and it wears its inspiration on its sleeve with themed dungeons that focus just as much on puzzles as they do combat. Your spells come in just as handy here, although the main ones to complete the dungeon never get too complicated. However, there are extra challenges that reward you with a Purple Soulbead, Mystralia’s version of heart pieces, that will test your creativity, sometimes requiring you to create a new spell just to solve the puzzle. These moments are when Mages of Mystralia is at its best.

The path through the game slowly introduces more and more ways to mix up your spells. At the beginning each type of spell, Melee, Projectile, Area and Self, is attached to one specific element. Besides introducing a variety of runes – modifiers for your spells – the game also opens the ability to switch elements on each type, greatly increasing the flexibility and complexity of your spells. Experimenting with these new options is great and the depth of spells that can be created is impressive. Unfortunately, the game waits right until the end of the game for everything to be unlocked, which doesn’t leave a lot of game left to unleash your full magical abilities. The last section of Mages of Mystralia offers a series of combat arenas but nothing to test your puzzle solving skills. 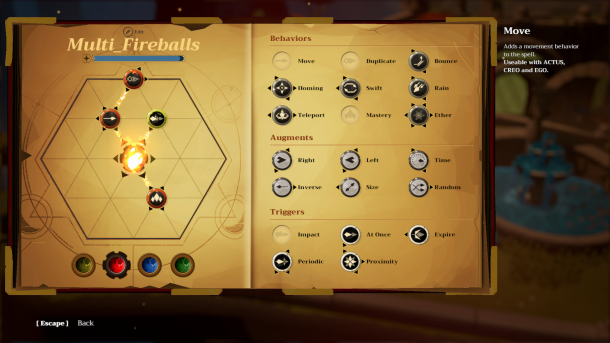 Mages of Mystralia is a game that has a lot going for it. The ability to truly create spells is something that few other games have attempted. Taking base spells and experimenting with various runes and elements is highly rewarding. Finding the perfect combination to solve a puzzle or deal a ton of damage is great. The dungeons are varied and provide ample opportunity to test out various spells. Luckily the gameplay is strong enough to overcome the misfires. The story and characters underwhelm both in execution and atmosphere and Mystralia could have offered a little bit more at the end to truly test your fully powered spells but you will still find a fun game that offers one of the best examples of what being a real mage might be like.

A code for Mages of Mystralia was provided to Pixel Related for review.