Yakuza Kiwami starts off in 1995, ten years after Yakuza 0. Series protagonist Kazuma Kiryu is living a decent life as a yakuza enforcer. However, after his friend Akira Nishikiyama (aka Nishki), murders the patriarch of the Dojima Family clan, Kiryu takes the fall for the murder in his place. Ten years in prison and Kiryu finds that life on the outside has changed. Nishki has become a full-blown psychopath, ripping his way through the yakuza ranks. After Kiryu finds out that their friend Yumi is missing, Kiryu discovers that there are few people he can trust and after his mentor takes a bullet, Kiryu vows to discover the truth. At the heart of this mystery is 10 billion yen worth of missing yakuza money and a child who seems to be at the center of it all. 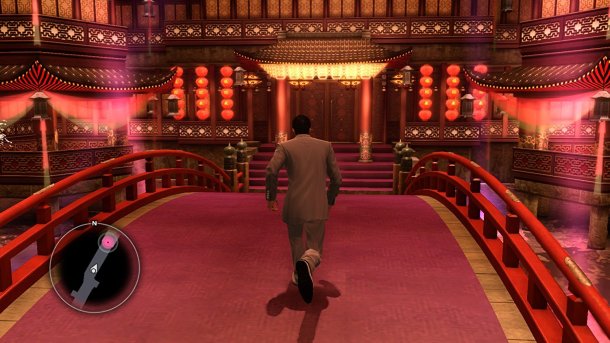 There’s no getting around the fact that this is, mostly, a remake of the original Yakuza. There are some really nicely remastered cutscenes, as well as multiple sequences placed throughout that give you more information about what exactly has happened in the 10 years Kiryu has been locked up. Moreover, new substories have been added and characters from Yakuza 0 make special guest appearances. That said, the main story is largely unchanged but if you played the American release of Yakuza with it’s (arguably) not great voice acting, it might be worth revisiting.

However, if you played Yakuza 0, a lot of this game is going to feel similar. In fact, it might feel a little too similar. Kamurocho, the primary city in Yakuza 0, is almost lifted directly from that game for Kiwami. While there are some changes, the biggest is due to the fact that this game doesn’t take place in the mid-1980’s. As such, you lose a lot of the vibe of the city and what once seemed to be hustling with life now feels far more dreary.

In fact, that’s the general tone of Kiwami. If you enjoyed the glitz and glamor of the 1980’s Japanese economic bubble, that is almost non-existent. Many of the side diversions, such as disco dancing and intense karaoke are replaced with a far more toned down version or outright replaced entirely. While that in itself isn’t terrible, there were often goofy side stories that would accompany them. Yes, there is a Pocket Racing side story again, but it certainly doesn’t feel as fun or funny as the one present in Yakuza 0.

While it could be argued that having these more silly distractions would take away from the tone of Yakuza Kiwami, that was one of the reasons that make Yakuza 0 so interesting. The side-distractions are more like going to karaoke and seeing single screenshots of other adventures in the background. While Yakuza 0 had these goofy rock concerts with characters in full regalia. It feels more generic and stands out far less than Yakuza 0 ever did.

The combat largely remains unchanged with a few notable exceptions. Rather than gathering cash to pay for upgrades, you use experience points. This feels like a direct response to the change in time, as money was far more abundant in 1980’s Japan than in 2005. There’s also a set “Kiwami” attacks that you can pull off if you are fighting certain characters. Some more difficult enemies will have the ability to refill their health bar. If you can match your fighting style to theirs in this moment, you can unleash a devastating special attack. However, aside from these two large changes, you still have four different styles that largely feel the same as in Yakuza 0.

The substories also suffer substantially due to the shift from games. There is no shy dominatrix, no chicken you can win for beating bowling. Instead, what you end up with is, unfortunately, a set of missions that at best don’t feel fleshed out and at worst, fall into that ever mocked category of “problematic.” Multiple missions focus on cross-dressers and transgender individuals, painting them as weird and not normal. There’s also one mission where you have to take a kid to a hospital only to find a group of black people waiting as their friend is seemingly dying and you cut them off. The black people immediately label you as a racist and try to attack you. While eventually the game does try to point out that this was a misunderstanding, it does feel kinda crappy.

Did Yakuza 0 indulge in this kind of thing? Well, yes. But it was largely outweighed by many other absurdist concepts that you almost could look beyond it (though I wouldn’t blame anyone if they couldn’t.) However, with trying to make these things into the focus of the “absurd” of Kiwami, it feels like it’s indicative of the homogeny largely present in portions of Japan. While that is a part of Japanese culture, it doesn’t work great in a western audience.

There also just isn’t as much of Kiwami as there was of 0. Yakuza 0 had multiple protagonists, spread across multiple towns. Each character had their own set of money making schemes and sidequests, that all felt like they could be fleshed out to be their own thing. Yakuza Kiwami has one protagonist in one town and no side-stories or anything that feels terribly unique. Substories begin and end quickly and are barely mentioned after.

The major draw, however, has to be the “Majima Everywhere” system. Rather than fighting the random giant tough guys found in Yakuza 0, Kiwami pits you against series mainstay Goro Majima. He can be found randomly throughout the city, hiding in dumpsters, wearing disguises or just walking around looking for you. However, the random missions you complete fighting him can be some of the funniest things in an otherwise unremarkable game.

Beyond that, though, there just isn’t as much content that is as stand-out as Yakuza 0. Kiwami is still a decent game, but if you’ve spent as much time in 0 as I have, this game will largely pale in comparison. Make no mistake, though. I am glad that I get the chance to check out the original Yakuza in a current gen format. However, releasing this in the same year as Yakuza 0 definitely makes Kiwami feel like an also-ran.

A code for Yakuza Kiwami was provided to Pixel Related for review.