I’m a sucker for striking visuals in indie games so naturally I was instantly drawn to Pinstripe. The brain child of a one-man development team, Thomas Brush, it’s a game that treads amongst serious and morose topics, including death, loss and the evil within.

Pinstripe is about experiencing a tale and it is an emotional and unsettling tale. The opening five minutes, wherein your daughter is stolen away, sent immediate chills down my spine while simultaneously breaking my heart. The character of Mr. Pinstripe is plain frightening. His speech oscillates from sing-songy happiness to guttural anger quickly and is truly unnerving. His design is equally unsettling and his entire domain is dark and disgusting.

Every aspect of the game matches this dark theme. The voice-acting is well done for every character. Mr. Pinstripe is the standout but the other characters’ anguish and despair is instantly felt. The music is somber and haunting and is used effectively during the roughest scenes in the game.

Aside from the style and plot of the game, Pinstripe is primarily a puzzle game. Here the puzzles are simply a means of discovery. Memento’s from Ted’s life slowly draw in the picture of Ted’s circumstances, while doubling as means of deciphering codes or directing you where to go. You are also armed with a slingshot, with basic controls for shooting objects in the environment and taking out the few enemies in the game.

In reality there isn’t much actual “game” to Pinstripe but what is present is enough to keep you going through to the end. The small amount of combat is never challenging platforming is generally simple enough to succeed at. There is also an odd safe-cracking mini game that is basically Flappy Bird, which is certainly weird to see crop up in such a serious game. The puzzles can occasionally be a bit obtuse and twice during the game you are tasked with collecting a certain number of items to be able to proceed, forcing a bit of back tracking, which feels unnecessary for what Pinstripe is going for.

Pinstripe is not a very long game, taking two to three hours to beat. The journey you take may not be a long one and parts may even feel a bit padded out, but seeing Ted’s journey through to the end is very rewarding. It would betray the game to discuss what the overall plot leads to but it is something that will stick with me for a long time. There are also enough little secrets that playing through again is a worthwhile experience. You’ll also see some elements that play into the overall plot that you’ll catch knowing exactly what is going on. Overall Pinstripe is a unique and memorable experience. It’s quite rare when I finish a game and am left sitting, deep in thought about what I just played through. Pinstripe is one of those games.

A code for Pinstripe was provided to Pixel Related for review. 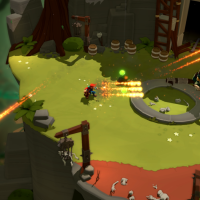