I’ll be upfront with something: I usually don’t care for rogue-like games. The idea of battling over and over again only to eventually end up dying and starting over just doesn’t appeal to me. However, every now and then a game comes along that offers a slightly different take on rogue-likes that ends up being right up my alley. Flinthook is one of those games.

In Flinthook you play a hooded space pirate. You have the titular Flinthook, which allows you grapple around levels with ease. The Flinthook shoots and pulls in a straight line. Think Zelda’s hookshot rather than Bionic Commando’s grappling hook.  You also have the Chronobuckle, which allows you to slow down time, great for taking shots with your plasma gun or avoiding especially hairy traps. 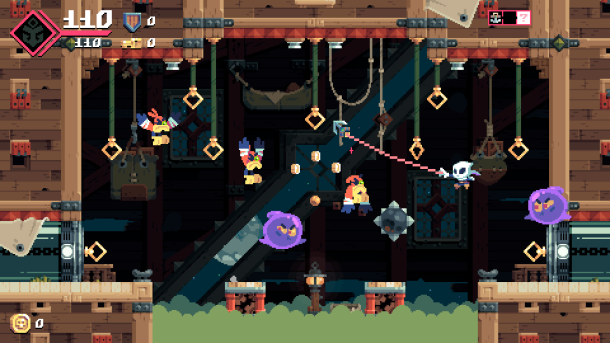 The controls are spot on and easy to use, once you get used to them. Using a controller, I found it easy to zip around rooms using the Flinthook. The choice was made to have both your movement and the aiming of your gun/hook solely on the left stick. In other words, you cannot move in one direction and shoot in another, unless you use mouse and keyboard. However, I found using WASD not good enough for the intricate platforming I needed. Eventually I landed back on using a controller as my preferred way to play and have no complaints with the controls, it just takes some getting used to.

The rogue-like elements of Flinthook comes from randomly generated dungeons under the guise of space pirate ships. The progression of a single run has you tackling multiple ships which will eventually lead you to the final boss. As you enter a run, you are given a choice between three ships to tackle. These ships will offer different characteristics, such as Platoon On Board (lots of enemies), Buffet (lots of healing food), Tenderizer (tough traps), etc. When you complete that ship, you move on to another set of different, more difficult ships. Rinse and repeat until you get to the final boss.

Each run has you collecting loot, which can be spent within the run on healing items or upgrades usable only on that run. Naturally this is a rogue-like so the location of these shops and the items they offer are completely randomized. You might not be able to buy everything you come across or you might amass a large supply of gold and not run into a shop. Such is the life of a rogue-like.

The part I love about Flinthook is, whether you succeed or fail, you are gaining experience and leveling up. Leveling up unlocks randomly generated perks to give you various abilities on your runs. This can range from XP boosts, more health, upgrades to your weapons and more. The catch is that perks use a point system so you can only have so many equipped at once. That means you can customize each run to focus on what you need. There is also a system of permanent unlocks that will stay with you every run that gives you more points for perks, health and XP.

Being able to level up and get more powerful also turns out to be completely necessary because as you progress deeper in the game, Flinthook becomes brutal. By the time you hit the third boss, you see that the game is not messing around. Enemies upgrade to more difficult versions and the layouts of the traps are plain devious. So far this has been the point where I’ve hit a wall. The unfortunate part is that this third area doesn’t appear to offer substantially more XP or permanent upgrade points than the earlier parts. What I’ve come down to is that I need to play through the second area more, leveling up and getting more upgrades, before coming back to tackle the third area again. This grind is a little disappointing but luckily the game is so fun to play that I’m not too bothered. Plus, if you get bored of grinding you can try out daily and weekly challenges with set areas that you can only try once.

It also needs to be said that Flinthook has fantastic style. The music is happy and fast paced. The intro song is one of the most entertaining things I’ve heard in a game in some time. The pixel graphics look great and the animation is beautiful. Being in a space pirate universe, the ships all stylistically look essentially the same but the design of the traps and enemies are unique and memorable. Just the fact that the entire game is set in space and the “spaceships” are just big wooden pirates ships is wonderful.

Flinthook comes so close to getting everything perfectly right. The game is for the most part a complete joy to play, with a good mixture of exploration, fighting enemies and avoiding deathly traps. Like many rogue-likes, it does become brutally difficult the further in you get. The key to success ultimately comes down to practice and grinding for more experience/abilities. In other games this might be unforgiveable but in Flinthook, it’s such a fun grind that I’m willing to let it pass. Flinthook is a game that is equal parts joy and nail-biting stress that I highly recommend.

A code for Flinthook was provided to Pixel Related for review.