In the pantheon of the classic computer RPG’s, there are a ton of recognizable names. Baldur’s Gate, Icewind Dale, Wasteland. These games were considered some of the best games of their time. Then, there was Planescape Torment, a game that I certainly don’t remember people talking much about at the time. Almost 20 years later, however, and it’s hard to understand why. Planescape Torment has a way more interesting world and characters than most of its contemporaries and the Enhanced Edition makes it easier than ever to play. 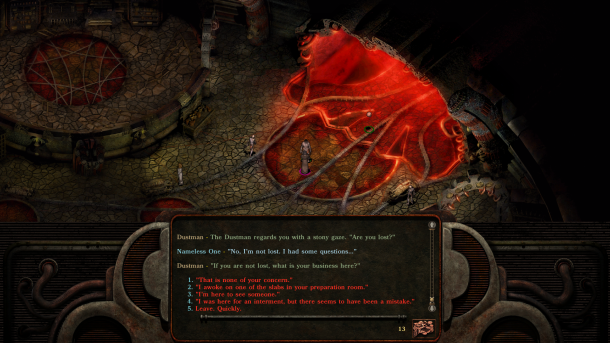 Planescape Torment puts you in the role of The Nameless One, an immortal being whose died so many times he can’t keep track anymore. Literally. When you awaken in a mortuary run by a cult determined to stop people from not dying (admittedly this is a weird idea), you said out on the quest to determine how you came to be immortal and learn about your past.

Along the way your recruit various NPCs to your cause, helping with different quests across the Planes, the world Planescape Torment takes place in. It’s a way more interesting story idea than a lot of traditional RPG’s. Rather than trying to stop the end of the world or bring about a new, Golden Era, you’re trying to determine your character’s history. While the idea of amnesiac characters has been overplayed throughout the years, here the idea feels way more compelling as that’s the main narrative you are crafting.

It’s actually incredible when you think about how much praise games like Baldur’s Gate, Icewind Dale, and others received at the time while Planescape was generally not popular back in its day. The world of Planescape Torment feels dark and different. Rather than the generic RPG world, Planescape takes place in the world that feels like a barbaric, magical wasteland. These clashing styles create something that really stands out even almost 20 years after the release.

The combat feels good but people who never grew up with these sorts of games will likely find some amount of problems. It’s very much in the vein of those other classic RPGs where you are selecting weapons and clicking on enemies while dice rolls determine if you hit or not. And you feel every single dice roll, to be sure. This game obviously was based off of Dungeons & Dragons and draws not only inspiration from the original campaign but draws on the mechanics of D&D as well.

The Enhanced Edition brings a number of welcome features. Rather than the game being stuck in an arbitrary screen resolution, you can now run the game in up to 4K. There are a number of quality of life changes including adding outlines to characters, enhancing the size of menu items and text, as well as other various performance improvements. It feels super easy to play now and if you have a touchscreen monitor you can even add touchscreen controls. This is obviously pulled out of the mobile version of this game as these games have sold very well on Android and iPhone.

There are some frustrations to be sure. Sometimes the hit detection will cause you to not hit the enemy that you want to or you won’t attack at all. Additionally, inventory management could have used some updating to make it feel a little bit simpler to manage. These complaints however become less of an issue as you learn how to play the game specifically; pausing at just the right moment to get the right attack in and making sure that you know exactly who to sell your inventory to.

Planescape Torment feels like the Dungeons & Dragons game for people who were not Dungeons & Dragons fans. It feels like the world is way more fleshed out and far different from anything seen in the other D&D RPGs. The story and characters are interesting and there’s a general atmosphere that feels far different from other high fantasy settings. Planescape Torment Enhanced Edition brings a number of improvements making a really well-regarded game feel like it can be played in the 21st century. Planescape Torment is a classic that has aged very well.

A code for Planescape Torment: Enhanced Edition was provided to Pixel Related for review.