Hotline Miami 2 was a disappointment to say the least. The larger levels, where you could not see anything coming at you, were frustrating and the emphasis on gun combat was not what you would have wanted from a sequel to Hotline Miami. So, we’re stuck with this dilemma where Hotline Miami is really great, but there’s no real follow-up to that gameplay. However, with Team Shifty’s Mr. Shifty, we have a game that takes those base mechanics of Hotline, adds in a bit of X-Men’s Nightcrawler and a healthy dose of insane, to create something that (while not perfect) is a better Hotline Miami 2 than…well, Hotline Miami 2.

The consistent relating of Mr. Shifty to Hotline may seem to ignore the merits of Mr. Shifty on its own, but one glance at it and the comparisons come clear. Mr. Shifty is a top down combat game, with a heavy emphasis on timing out enemy attacks and using melee moves. While Mr. Shifty’s style is more muted in comparison (the soundtrack and art-style don’t stand out in comparison), the influence seems clear.

However, while Hotline Miami would give you the option to pursue using guns, Mr. Shifty prefers using melee and weapons exclusively. Hotline may be more brutal, but Shifty is way more inventive with its weaponry. Using a lightning bolt from a statue of Zeus to create people kebobs is infinitely more funny than almost anything that Hotline had.

That humor seeps into everything about Mr. Shifty. This game doesn’t take itself seriously, especially with the more ridiculous parts of the game. The dialog is well written and does a good job of highlighting how insane some of the things you are doing are.

But even so, the thing that makes Mr. Shifty stand out is the addition of the ability to “shift” around the environment. With a press of a button, you can make your character disappear and reappear around 5 feet ahead of where your character is facing. What this means is that as enemies are shooting you, you can jump out of the way of bullets. Or, as it happens more often, you can jump behind them, punch them a bunch, and jump behind another group of enemies to do the same thing. 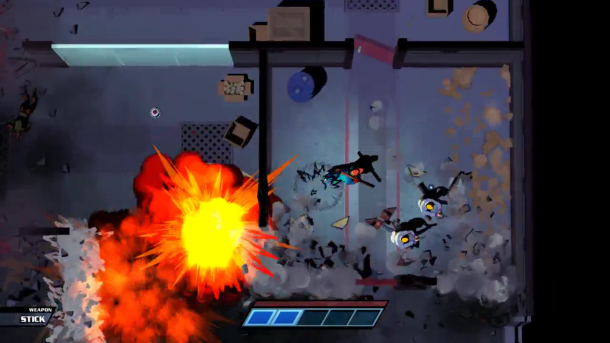 Initially, this idea seems like it could run itself thin real fast. However, the challenges the game keeps adding make it way more interesting as the game progresses. What starts as an ability to jump behind enemies, becomes a strategic component to everything you do. When you’re in a hall with a laser grid rushing towards you, you can use your shift ability to jump behind the laser to take out the group of enemies on the other side of the room. You can then use it to jump between rooms to take out patrolling guards.

The most fun, and most critical, component to this ability, is using it to pit enemies against each other. For example; there’s a group of about 30 enemies, one of whom has a rocket launcher. These guys are all kind of idiots, so you can start to basically kite the rocket launcher guy. Eventually, when you are surrounded and the rocket launcher is about to launch, jump out of the way and let the rocket deal with them. Or, my personal favorite, grab a mine, throw it at a guy and have him run into a group of enemies.

This ability is so cool that when the game forces you not to use it, it actually becomes way less enjoyable. Your character doesn’t move quite as fast as you’d like so you end up just waiting behind whatever cover you can find in order to do anything. To reference Hotline Miami one more time, these sections all feel like the hospital level of Hotline which was absolutely the worst part of playing that game.

The final levels of Mr. Shifty significantly increase the difficulty, as well. The penultimate level feels like it should be the conclusion of the game. The final level, specifically the second to last room, is a massive slog. It can take upwards of 30-40 minutes to get through this level, while most levels only last around 20 minutes max. 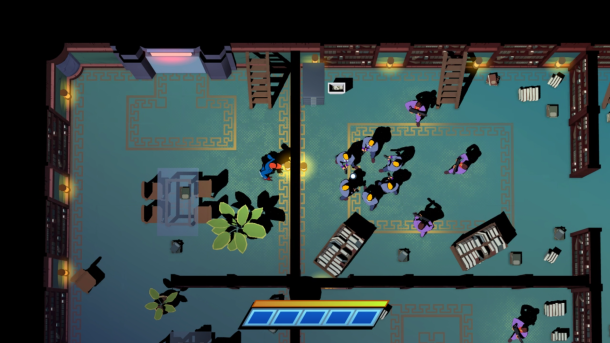 For the most part, Mr. Shifty is an absolute blast. The shift ability makes the game feel incredibly empowering. The game is well written and feels like it’s having as much fun as you are for most of the game. If it didn’t feel the need to so often take your abilities away, and if they could break up the last levels a bit more so that they are not so frustrating, it would be the perfect sequel to Hotline Miami. But even as it stands, Mr. Shifty is a fantastic game.

A code for Mr. Shifty was provided to Pixel Related for review.