I absolutely hate that I dislike Yooka-Laylee as much as I do. For the sake of disclosure, I backed the game on Kickstarter and enjoyed the little bit shown off in the Toybox demo. Sadly, stretching out that experience over the course of a far-too-large-for-its-own-good game makes the entire experience utterly unenjoyable, with moments of inoffensiveness being the shining points. 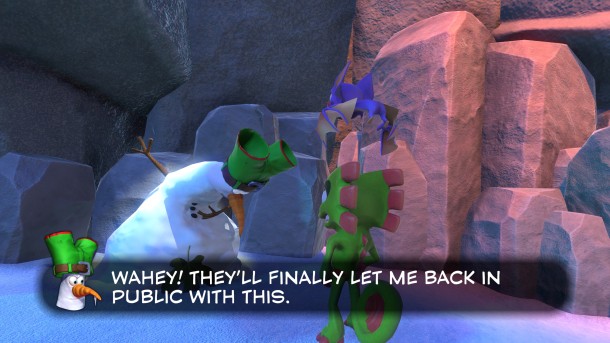 The obvious comparisons to Banjo-Kazooie are natural, as Playtonic is comprised of former members of Rare. But where Banjo-Kazooie was a fun romp with tight levels and enough content to keep your attention but not overstay its welcome, Yooka-Laylee well outlives any of the charm found in the early game. It becomes even worse if you are obsessed with collecting everything you can. After nearly 30 hours of play, I had still not collected everything and I honestly can’t tell if that’s due to a glitch with the game or something I simply missed.

Like Banjo-Kazooie before it, Yooka-Laylee puts you smack dab into a cartoonish world where you have to travel between levels in order to collect various items in order to progress. Where Banjo had music notes, puzzle pieces and jinjos, Yooka replaces these with quills, pagies (pages of a magical book Yooka and Laylee are trying to re-capture from the evil Capital B.) and Ghost Writers respectively. So far, this is basically what you’d expect from a game trying to recapture the magic of Banjo-Kazooie. Then, you actually start playing it and immediately realize the issues.

The first thing is that, rather than collecting things like feathers and eggs to use abilities, as you did in Banjo, all of these are governed by a stamina bar. A stamina bar in a puzzle platformer is an absolutely terrible idea. And it’s easy to see why it was done. Rather than running out for feathers as you are flying, requiring you to walk around and collect more feathers wherever you can find them, you simply land and regenerate your stamina.

The problem is that until you get late into the game, the stamina bar simply is way too small for you to use it to any meaningful amount. Using your sonar attack, when you first unlock it, you get maybe a few hits with it. Your roll ability is governed by this, as well, meaning the fastest method of travel for a majority of the game, is severely limited. Eventually, you’ll unlock stamina bar upgrades, but until you get a few, the use of abilities is a miserable process. 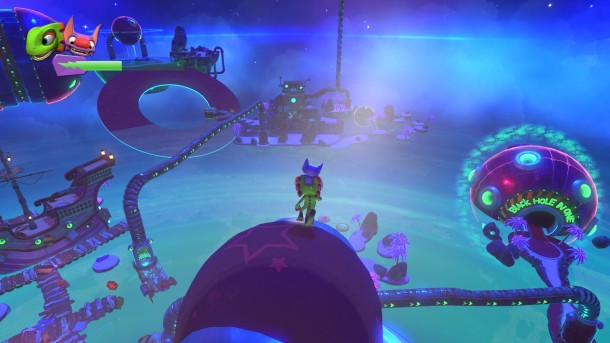 Added to this is the fact that you never quite know what abilities you’ll unlock and when. Rather than following the Banjo method of having, essentially, all of your critical moves unlocked from the beginning of the game, Yooka requires you to unlock these moves. Each level will add a couple more abilities to unlock. But things that seem like they are no-brainers, like the ability to fly, are reserved for the end game. You cannot fly until you’re heading into the final level of the game and that is absolutely terrible.

This primarily is due to the size of the maps. A while ago, I had heard that Banjo-Kazooie: Nuts and Bolts added in vehicles to the design of the game due to the sheer size of what they were making. The levels were too big to traverse on foot, so vehicles were created to make that traversal easier. If someone at Playtonic could have remembered that, that would be fantastic. Because the levels are absolutely too large for what they require. There is a huge amount of unused space throughout each level. There’s just nothing there.

So when you are trying to collect the final few things in a level, you end up trekking through these areas over and over. While the in-game Tonics (abilities you gain by reaching certain milestones) can provide helpful beeps when you are getting near to an item, what this eventually turns into is beach-combining with a metal detector. Does that sound like fun to you? Probably not in a game with literally over 1,200 items to collect, some of which aren’t picked up by this tonic.

There are some guarantees, however, to each level. Each level will have five different Ghost Writers, which as mentioned are stand ins for Jinjos. Here, though, they do require a little bit of trickery to get them. One of these will attack you and you have to try to either shield yourself or dodge the attack to get in a hit. Another requires you to find them with your sonar ability. As a slight variation on the Banjo formula, it’s not terrible, but not earth shatteringly different.

Another guarantee is a terrible minecart level. As someone who actually enjoys minecart levels in games like Donkey Kong Country, the minecart levels here are miserable. They all feel far too floaty and the precision required can be a massive pain. Moreover, because it’s in a 3D space but uses a 2D side-view for the camera, there are turns where you simply have no idea what will be waiting for you. Of course, you can try to shoot the cannon on the cart, but unless you are exactly lined up with something, you’ll have to wait for the shot to re-charge. Same with boosts and the ability to slow down for precision jumps.

Then there are the mini-games in every level. These are absolute garbage and the fact that in order to collect everything in a level requires two playthroughs is a disaster. These mini-games use a similar but not quite consistent with the rest of the game physics engine that feels far too unresponsive and slow to actually enjoy the games. Moreover, the rules are inconsistent with themselves.

For example, one game plays similar to a Temple Run style game, but you can move forwards and backwards. But if you get stuck on something and the camera moves past you, sometimes you’ll lose a life or sometimes you’ll just re-spawn. To make matters worse, sometimes you’ll respawn even when you are not behind anything. And, as icing on the cake, if you get re-spawned, you can immediately be placed in an area where you’ll die and lose a huge amount of what you’ve collected throughout the level. Considering the second playthrough requires you to get a high score, losing one life can cost you the entire time you played. 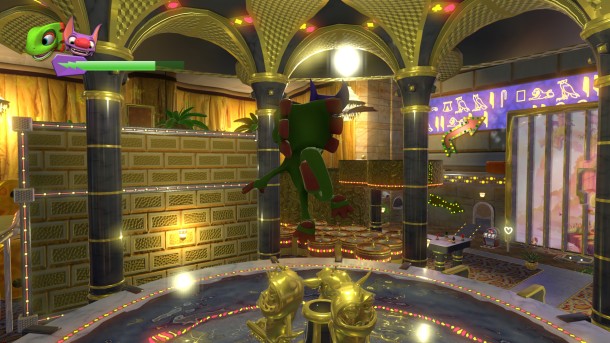 The bosses, too, are really disappointing. While the first boss is okay, eventually the amount of time required to beat a boss can take way too long. With little to no health items, you can be at the final stage of a fight, only to lose and have to restart the entire fight. These fights often put you in a forced camera perspective, and considering that the camera can just lose track of your character or enemy shots, it feels like a miracle any time you’re able to pull a fight off.

All of this, if you aren’t trying to collect everything, could be excusable to you, though. You could go through the game and never touch a minigame, boss fight or a minecart and be able to reach the final fight. But at the end of the day, this game’s Kickstarter was directly inspired by Banjo-Kazooie and that game never had the issues that Yooka-Laylee does. Levels were iconic, yet small enough that you could easily find almost everything you needed. Fights, while not ideal, never felt as poorly made as the ones here do and the physics were generally consistent.

This is not to even mention the technical issues found throughout. Often times, the game feels like it’s being held together by chicken wire and duct tape as numerous frame rate drops, even on lower settings, any time more than a handful of effects are occurring on-screen.

There are inconsistencies in gameplay mechanics, as well. One tonic will generate a tone and cause the controller to rumble when you are near specific hidden objects. It also rumbles when you are near the final collectibles in each level. However, the casino level near the end of the game specifically has different collectibles for the level and doesn’t rumble near these. As a result, you can spend hours beach combing without a metal detector trying to find this last item…And still be unable to find it. For a collect-athon, it it does a poor job of encouraging you to collect everything.

While the characters in Yooka feel like they belong in a Rare N64 platformer, the rest of the game doesn’t. It feels like an unfinished Unity project. A huge project, no doubt, with a lot of decent writing and good music, but still unfinished. There are obvious references to other Rare projects, with things like ice keys, googly eyes on everything and fourth wall breaking throughout but when it comes down to actually playing it, Yooka-Laylee just isn’t fun.

Yooka-Laylee should have been better. The people who Kickstarted this game deserved better. The people who have been waiting since 2000, when Banjo-Tooie came out, for another game like that deserve better than this. It is a miracle that Yooka-Laylee is coming out in the state it’s in because it’s simply one of the most disappointing Kickstarter games I’ve ever played.

A code for Yooka-Laylee was provided to Pixel Related for review.

For the sake of transparency, the writer of this review, Addam Kearney, backed Yooka-Laylee on Kickstarter at the $55 level.