Over a decade ago, Psychonauts helped to define much of what Double Fine would be. The platformer was appreciated by those who played it, though it notoriously didn’t sell very well. Years later, after the collapse of Majesco, Double Fine would get the series rights back and in the process, put out a string of re-releases, culminating in the announcement of a crowd-funding campaign for a proper sequel, as well as a PlayStation VR exclusive stand-alone adventure. Psychonauts in the Rhombus of Ruin is now available and while a majority of it plays like a VR tech demo, there are some shining moments that feel like they belong in the sequel. 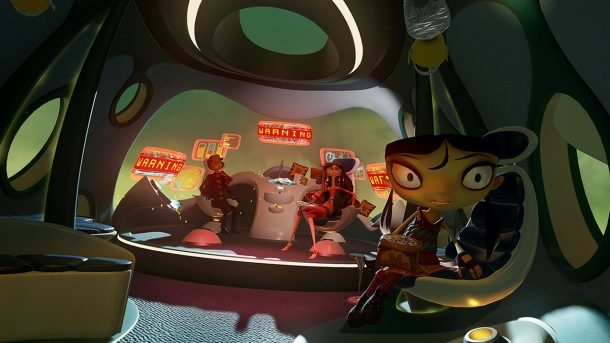 Rhombus of Ruin takes place immediately after the original. Following Raz officially becoming a Psychonaut, Raz and the other Psychonauts of Camp Whispering Rock must go on a mission to rescue Truman Zanotto, leader of the Psychonauts and father of Raz’s girlfriend (?) Lilly. After psychically linking with Truman, Raz and his companions crash land in a secret, unused Psychonaut base. Raz and his friends are captured and Raz must psychically link with them to get free. During his quest, he must also cure them of psychic poisoning and figure out the secret of the Rhombus of Ruin.

Mostly, though, you end up doing a bunch of simple VR interactions. Unfortunately, that’s what a large portion of the game consists of. You use a few basic abilities from the original Psychonauts, including pyrokinesis, telekinesis clairvoyance and Psy-Beam. The ways these abilities are used generally don’t feel unique after games like I Expect You To Die, Job Simulator or even something like Arkham VR. You grab the environment, shoot stuff and solve simple puzzles, all of which has been done better before.

Moreover, it’s been more interesting before. While there is definitely a bit of that Psychonauts humor, the puzzles never get so complex that they are very interesting. The only time that the puzzles get “complex” is during a slide puzzle and slider puzzles are the absolute worst.

The really disappointing part, though, is that for a good portion of the game, you use clairvoyance to Daisy chain between fish in the ocean to get you to other areas. It’s a serious time investment of turning your head, teleporting to a fish, teleport to another fish and on and on. It’s so tedious, so boring, that they make a joke out of it. But if you know that it’s bad, don’t make a joke about it. Fix it.

There are two points, though, where Rhombus of Ruin shines. The first is when you use clairvoyance on a psychically poisoned Mia Vodello. If you ever found the secret area of Mia’s mind in the original, you can guess what happens here. It’s a bit dark and definitely makes you take a step back.

The second, however, shows the potential of what Rhombus of Ruin could have been. A character returns and you use a psychic door on their mind. It’s the one time you actually go into a character’s head. Moreover, it brings back those hidden memories and tells a genuinely interacting story. Rather than just being basic storyboards, you actually interact with this world, playing out these memories in real-time. It actually is incredibly well crafted and the boss fight actually requires you to think.

But it’s probably only a quarter of the games 2 hour run. The rest feels so tedious and boring that you almost can’t help but worry about Psychonauts 2 proper. While Rhombus of Ruin is inevitably going to be a different type of game than Psychonauts 2 (and it should be noted that Rhombus of Ruin was funded separately than the Fig campaign), after nearly a decade of waiting, for this to be the first new Psychonauts thing just feels like a throwaway of a good idea.

A code for Psychonauts in the Rhombus of Ruin was provided to Pixel Related for review. 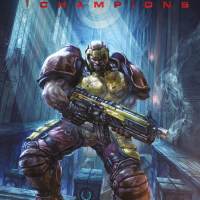