There are plenty of opportunities for VR games to succeed and for them to fail. Games can succeed by being unique, using the VR space in a new way or by just being fun games. However, when VR games fail, they can fail hard. Motion sickness combined with poor controls can create a mess unlike almost any other. Loading Human Chapter One has all of this, plus a pretentious mess of a story creating one of the least likeable games of the

Other VR titles handle movement in a space by having you go to pre-defined spaces, similar to a point and click game and generally this works decently. Unfortunately, Loading Human Chapter One uses probably the most backwards way of moving from space to space. You use your Move controllers as the arms of your character and by tapping the move button on one controller you shift your direction. You can then use the controllers to move in the general direction. Need to crouch? Aim the controller down and press the button again.

It’s a slow process made all that much worse by the fact that your character gingerly walks through every single situation like he’s smelling the flowers along the way. With no run button, everything takes double or triple the amount of time that it realistically should take. Moreover, this generates issues with keeping track of items if they drop to the floor. If you drop something, rather than the item magically re-spawning where it was, you have to stop all of your momentum, turn your character crouch and find the item in question. You end up feeling like that kid who dropped their glasses and who can’t see anything without them. You just kind of feel along the way and hope that you can find the items.

You can try to use the Dualshock, but somehow the controls are worse than using the Move. One stick moves you forward and the other will snap you in a direction. This is incredibly disorienting at times and makes you feel like your body is using tank controls. It’s absolutely miserable.

To make matters even worse, the head-tracking is dubious at its best moments. If you had the option to move your head in on direction to turn, a lot of the movement issues could be corrected. However, when you turn your head, you generally get warning telling you to move your head back to being straight forward. You can’t move or really do anything in this stance. So now the idea of exploring this world is taken almost completely out.

The game also does a poor job of communicating issues with the VR. A lot of games have a silly thing where you can put your head through the environment. But Loading Human Chapter One is a game devoid of fun, so anytime your head lightly grazes any surface, the screen will go back and you see an image of a head with a line through it. You have to stop whatever you are doing before you can do anything else. Not that the game communicates what is going on, as it’s literally a head with a line through it and no text explanation of what’s happening. 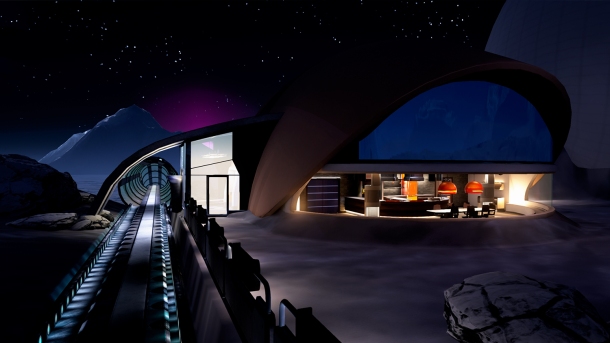 Not that the rest of the game is in any way enjoyable, other than from a “holy crap, look at that stupid thing” standpoint. The game starts you in a bathroom and as you feel your way around the controls, you get a REAL good look at your living Cheeto of a character. The Move is not the best motion controller in the market right now, but good lord, seeing the reflection of what you are performing is honestly hilarious. When you crouch you look like a crab-man and any slight twist of your wrist will leave your character with a hand that is 180 degrees from where it should be. However, this moment is fleeting and doesn’t actually provide you with one of those “so-bad-it’s-good” games. Rather, it’s just a bad game.

From what I could gather, the story goes something like this: mumble, mumble, mumble, mumble mumble. The voice work in the game is infuriating as the mixing is, at best, inconsistent. Characters mumble through their lines, sounding completely unsure of what they are saying. It’s clear that at least a large portion of this games cast do not speak English as a first language and that’s fine but some subtitles really would go a long way. Or, just record the dialogue in their native tongue and actually have some emphasis on your voice.

One character is supposed to be incredibly old and ill and as a result, speaks in a strained voice. However, the audio mixing is never loud enough in one place to really make out what they say. Moreover, if you are not near one of the game worlds speakers, their voice becomes more and more quiet. This becomes more frustrating when this character is telling you what to do and you can’t make out what they are saying. 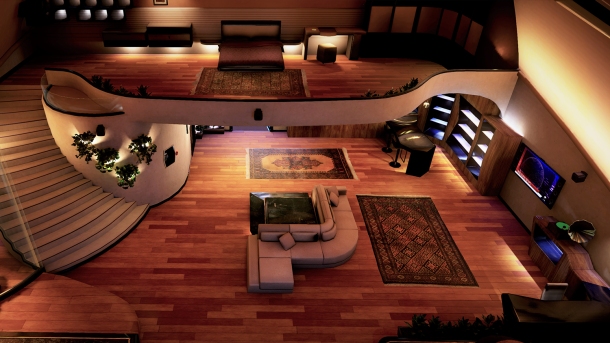 The entire story centers around your character, Prometheus (that’s his real name) and Alice. They are on a quest to save Prometheus’ father by going to space…I think. Again, the is so much mumbling it’s incredibly hard to follow exactly what is going on. The story purports to have “Emotional Connectivity” but often times all of this feels incredibly forced and trite. The characters feel fairly two-dimensional (again, not helped by the mumbly dialogue) and the entire experience is so frustrating that you just can’t be bothered to care about the characters.

Another big issue is just how dark the environment can be. One time, I was required to find a set of notes on a characters desk (though because of the mumbly voice work, I legitimately couldn’t tell if it they said it was in a desk or a vest). I spent literally fifteen minutes looking for a piece of paper because I couldn’t find it in the insanely dark room I was in, only to find that paper not “in” but on a desk in a dark corner of the room. I had to consult a YouTube video for a paper on a desk because in the dark of the room, I couldn’t find it.

After that, I got to make tea and play connect the dots with a character’s memories. And this was a highlight. At Loading Human Chapter One’s best times, it’s boring. At its worst, it’s a vomit inducing mess. Take, for instance, a section not long after where I had to enter pilot training to fly through a set of rings (because Superman 64 is the best example of a game). This section requires you to use one stick to aim up and down and the other to move left and right. Half of the time, it was sheer luck I passed through the rings. But then, the ship started moving around erratically and was legitimately a moment where I threw up. Even in the worst VR experiences I’ve ever played, I’ve never hit that point. And then I failed. And I had to do the whole thing over again. And then I quit playing Loading Human Chapter One.

The entire “experience” is $40 but you should not pay a single penny for the game. This game is also available on the HTC Vive and according to players on Steam, the game is best played sitting down but I found the game nearly unplayable in that situation as the aiming was even more shoddy. Loading Human Chapter One is a game that not only do I not want to play, but I physically cannot stand to play it.

What the game really ends up being is a title where there could be some goofy VR interaction fun like a Job Simulator or even a Batman: Arkham VR where the game might have a serious tone but it still allows for some silliness. But the game is so hellbent on creating an “emotional experience” that it ironically removes the one emotion that you could have from the game, enjoyment. That moment in front of the mirror at the beginning of the game feels like if that was what the entire game was meant to be, the entire thing could be hilarious. Instead, that moment, so organic in it’s discovery, feels like it’s just a glitch in the game, never designed to be as fun as it is. Fun and enjoyment feel like glitches in this bland, boring and irritating game.

There’s nothing redeeming about Loading Human Chapter One. Characters are bland at their best and their mumbly voice work leaves a lot to be desired. The controls simply do not work well with the PlayStation Move controllers and the Dualshock controller is even worse, somehow. It’s ugly and broken. While some players have enjoyed it, it’s hard to see how. In all of the years I’ve reviewed games, there’s been only one other game I could compare my absolute hate of this title to.  And believe me, I’ve played bad games. Loading Human Chapter One could easily be the worst game of 2016 and absolutely is the worst game I’ve played in years.

A code for Loading Human Chapter One was provided to Pixel Related for review.