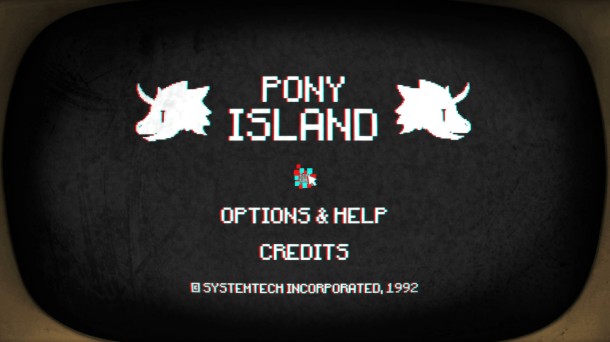 Pony Island isn’t a game about ponies, nor is it a game about islands. That much you know just from looking at the Steam store page. Rather, it is a game about a game about ponies, wrapped in the odd idea of being about being trapped in an arcade machine. However, aside from the weird premise, there is actually an interesting puzzle game, alongside some of the best fourth wall breaking that a game has done since Eternal Darkness.

The concept of Pony Island is pretty straight forward. Pony Island is a game that was created by, presumably, Satan, to trap souls for eternity. A mysterious character breaks through the game and attempts to help you release yourself from the game.

There are two main parts to Pony Island. The first part is the actual Pony Island game, a mindless endless runner that has you jumping over gates and shooting enemies with a laser. As you go further into the game, you find that the internal game of Pony Island is being built upon by a designer who keeps adding things like an open world mechanic or a XP system, both of which add practically nothing to the main way you play this.

This part of the game seems like a critique of the concept of the designer being all-powerful and always correct. Often times you are chided for “playing the game wrong” and breaking the way you are meant to play, even being called a cheater at times for not playing by the game’s rules. It seems like a sly critique to the concept that the designer is an omnipotent being, always knowing how to play a game best and insulting anyone who finds a different kind of enjoyment from a game besides the one that a developer intended. Of course, this could all be bollocks and it could just be the game creating a character who is acting like a baby.

However, that is only half of the game. The other half is a weird fourth wall breaking puzzle game that has you trying to rebuild broken menus, creating logic loops, exploring emails and looking through earlier versions of the game. This part of the game is really the best part and where Pony Island really becomes something special.

The majority of puzzles are logic loop puzzles, where you are given commands that allow you to direct certain text-based commands in certain ways to create new rules for the game. While initially these puzzles are as simple as redirecting a command, eventually, you have to create a loop that will compile quantities to solve “if, then” equations. Solving these can be really tricky, but eventually when you find your “ah-ha” moment, everything clicks.

Beyond these, though, are other weird puzzles that you wouldn’t expect in this kind of game. These culminate in the penultimate confrontation in one of the most unique, fourth wall breaking things in a game. What happens is on par with Psycho Mantis from Metal Gear Solid and to spoil it would be a crime. However, this is a thing that will have to be talked about in Game of the Year discussions, and it is still only January.

All of that said, the parts of playing the in-game version of Pony Island tend to go on for a bit too long. The joke of these sections feel one note and they aren’t really fun to play. This may have been intentional on the part of the designer, but sometimes it feels like it just goes on for too long when there are much better sections of the game that could have been expanded upon.

Nevertheless, the overall experience of Pony Island feels unlike anything else around right now. The most memorable segments of the game are so mind-boggling and unique that they will break your mind. This, combined with the relatively low price of $5 make Pony Island a must play.