Assault Android Cactus has you playing as a space officer known as Cactus. After responding to a distress call, she find herself face to face with thousands of robots who have taken over her ship. It’s up to her, as well as her fellow officers, to stop the robots in one of the funnest twin stick shooters of the year.

A large chunk of the game’s levels just place you into an arena of seemingly endless waves of enemies, others might have you travelling on a train being attacked by giant death laser beams or have you travelling through a series of rooms to reach the end arena. The arenas themselves all are fairly simple but each offer their own kind of challenge. One arena might change its wall layout after each wave and another might have a series of rotating floor tiles that require you keep moving. 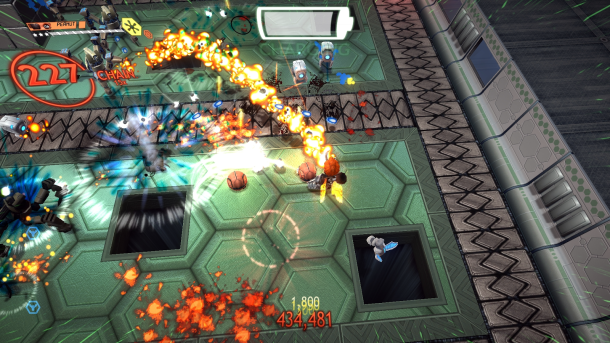 As a twin stick shooter, it’s fairly simple but it uses this simplicity to its advantage. Every enemy can be defeated with your main arsenal, which consists of a primary weapon and a secondary weapon that, while more powerful, requires you to gather bits of metal dropped by enemies to charge it. Each character has their own unique set of weapons, as well. Cactus has a pretty standard layout, while other characters like Starch have a death beam for a primary weapon and a missile barrage for a secondary. If you are a person who plays these kinds of games for the high score, it’s definitely worth trying every character to figure out exactly who fits your play style.

The main conceit of the game is that, as you are playing each level, you have a battery level that drops as you progress. You can revive yourself multiple times but if that battery charge ever goes out, you are dead and need to start the whole affair over again. You generally will gain battery charge after killing a certain number of enemies, so the whole issue can be avoided as long as you don’t get surrounded and don’t stop shooting.

This could be frustrating if the levels weren’t fairly short in nature. In fact, it’s only really an issue when you are going against boss characters. Bosses require you to learn somewhat strict patterns in order to do any meaningful damage. Once you’ve taken a certain amount of health off of them, they will change their forms and usually this is when they drop battery charge. If you learn a certain forms pattern too late, you will need to start the whole process over again.

The visual design of each character and the environments are all fairly bright and good-looking. Each of the officers have their own unique look to them and they are all visually consistent with each other. It’s just visually pleasing to look at.

Assault Android Cactus is the kind of game that really any fan of twin stick games can get into. If you only have a passing interest in the genre, each level is fairly short and you can experiment with different characters to find your favorite. If you are more of a hardcore fan, you can keep replaying levels with different combinations of characters to get high scores. It’s rare that a game gets this much right about its genre but Assault Android Cactus definitely knows exactly how to keep players coming back for more.

A code for Assault Android Cactus was provided to Pixel Related for review.