Playing multiplayer platformers can be incredibly fun and rewarding when done properly. Look at the recent entries in the Rayman series, for example. The games are challenging, yet at the same time, all the more fun when you play with others. Roving Rogue, however, is not one of those kinds of games. It’s frustrating and feels even worse when played with others.

Roving Rogue puts you in the role of a knight who’s just defeated the final boss and rescued the princess. However, now you need to escape the collapsing castle. This, for some reason, means that most of the levels have you travelling upwards because…reasons.

The only real ability you have, besides basic platforming, is the ability to perform a brief teleport dash through the air. This teleport dash has, basically, a pre-determined amount of distance you can travel. While it is possible to stop short of that distance, it’s nearly impossible as when you initiate a dash, you are only given a brief moment to stop short of the full jump distance. In a game that often requires precise platforming, having a system like this just doesn’t work.

These issues are propped up by the fact that the directional detection is wonky. You can point your character in a specific direction to teleport and the arrow indicating which direction you are going will turn 180 degrees at the last second.

A lot of these issues could be much less frustrating, if the game didn’t attempt to be an autoscroller. A platforming game with imprecise platforming should never encourage you to move more quickly through a stage than you need to, especially with how quickly the difficulty ramps up. Then, it slows down, then back up, down for a little bit to make you comfortable, then right back to frustrating.

The game does add enemies to the mix, but with only the ability to jump on them and with the platforming being completely imprecise, your best bet is just to stay away from them. What’s more is that sometimes you will try to jump on them, just to sort of slide through them.They don’t take damage and then have an open window to hit you.

Now, the one thing that multiplayer does have going for it is that if your partner dies, you become a ghost and can respawn upon touching them. However, it also adds its own challenges as well. Players collide with each other when they are jumping. So, not only are you jumping and teleporting, but you’re trying to avoid each other so you don’t collide midair and fall into the rising lava pit below. 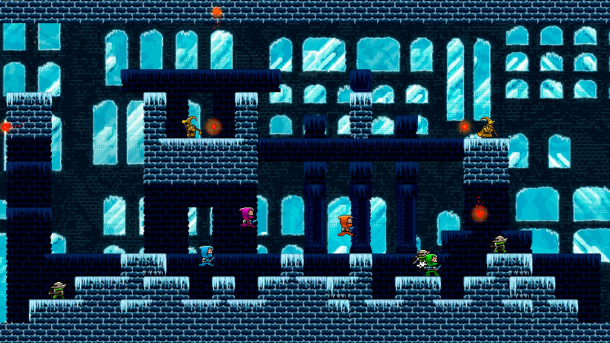 Roving Rogue should be more fun than it is, but it’s just not a well made platformer. There were clearly some bad choices made around a pretty decent mechanic of teleporting. Unfortunately, all of this promise is buried beneath a mound of bad decisions.

A code for Roving Rogue was provided to Pixel Related for this review.