When SWERY and Access Games unleashed Deadly Premonition upon the world in 2010, it was widely claimed to be the first real “cult” hit in the video game world. The stilted dialog and clunky controls created a game that was marvelously cheap and had a genuine B-Movie feel to it. In short, if you understood what SWERY was trying to do, it was a life-changing video game.

Years later, SWERY teamed up again to create the previously Xbox One exclusive, D4: Dark Dreams Don’t Die. While the game was a critical success, the game didn’t see as many sales as fans had hoped. Over the previous months, SWERY has hinted at a possible PC release. Now, we have a final release date and a demo to check out.

The game will be available on June 5th and will come in two forms. The base game will be a $15 download on Good Old Games, Humble Bundle and Steam. You can also buy the deluxe edition for $30. That version will come with a bundle of DLC’s (which will also be sold individually) that includes:

There will also be two special “SWERY’s Choice” DLC’s avalible:

With the demo now available, I decided to finally take a look at the next game from one of the best Japanese developers around. 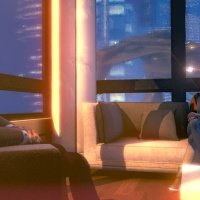