Switch Galaxy Ultra has a lot of appeal going for it, at least on the outside. It’s a cross-buy PS4/Vita title with a comic book storyline designed by Wipeout’s original concept artist, Darren Douglas. Looking at screenshots, it looks like it could be a high octane mix of Wipeout and Amplitude. Yet, once you start playing, you realize that it has none of the appeal of those games and that it doesn’t do much to try to appeal to anyone.

Switch Galaxy Ultra has you playing as a pilot named Vince Vance. After losing a large amount of money at a casino, he’s hired by the Dakur Corporation to be a space pilot for them and collect Tantalum. That’s about all of the plot you need to know for Switch Galaxy Ultra.

Quite frankly, though, the story doesn’t much matter. Switch Galaxy Ultra’s plot can almost be completely ignored, as there aren’t any really compelling characters. The game uses comic book panes to tell the story but with there being minimal voice acting and with the art not standing out in any meaningful way, it’s tough to get invested.

So, with no real compelling story here, it’s up to the gameplay to leave you interested. Your racer is set on a multilane highway. You can switch between lanes to avoid obstacles and collect points. Up to this point, the game can be fun. Then the real pain of this game begins. Each level features a section where you need to fly through space to collect tantalum orbs. These orbs are used to unlock levels.

Once you get through this section, however, you’re thrown back onto the highway and must reach the end of the level. Every time you hit an obstacle, you lose an orb. This wouldn’t be terrible except for a few major issues. There are a lot of times, especially on the Vita version, where you’ll be gliding along the highways and see an upcoming obsticle. When you try to move out of the way, though, your ship will just decide to say “No, you didn’t want to do that” and will leave you in that lane.

While it seems at times like the game is trying to ensure that you don’t move into another lane with an obstacle immediately in your path, at other times there is no clear reason as to why this happens. This becomes a major annoyance when you’ve had a near perfect run but are stuck in a lane with three obstacles in front of you. This causes you to lose three orbs at the end of a run that lasted a few minutes. 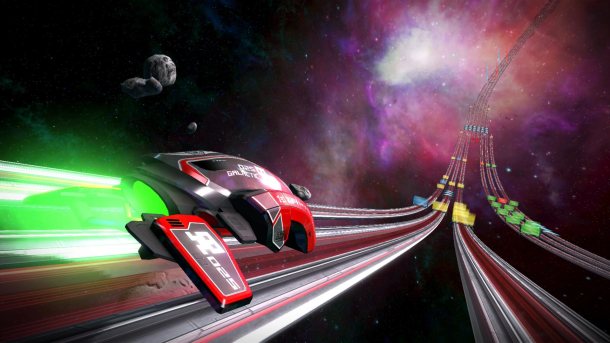 This becomes especially problematic in later parts of the game where you need to have several perfect runs just to advance to the next level. If you go back to a level that you initially collected 7 orbs in, in order to collect the three remaining orbs, all of that work can be thrown out because the game can’t decide what lane you should be in.

However, you can collect credits throughout levels in order to purchase “gate passes.” These, essentially, allow you to pass through colored walls that block traffic, without taking damage. Your credits, though, are also used to buy upgrades for your ship so that you can get through levels somewhat more quickly. There are never enough credits in a level to really make buying both upgrades and passes feasible.

What you end up doing is going through the first part of a level as fast as you can. This is very easy since there is no penalty for colliding with anything prior to collecting the orbs. Then, the second you collect as many orbs as you can, you slam on your brakes and move as slowly as you possibly can to ensure you hit nothing for the rest of the run. It’s more of a chore than fun gameplay. 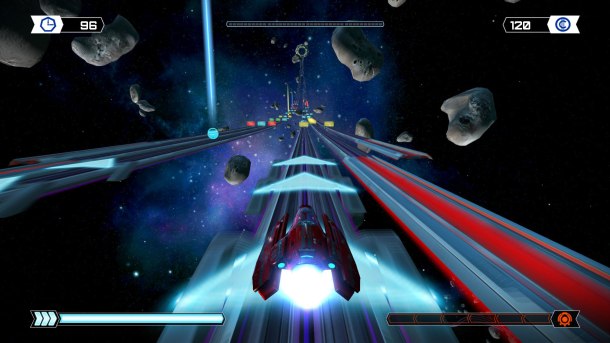 It’s a shame, too, since Switch Galaxy Ultra features a decently fun survival mode. This mode is endless and doesn’t once force you to collect any orbs. All you need to do is survive for as long as possible. The most fun part of the game, sadly, is a survival mode that makes up a fraction of what the full game features.

However, if the game featured any stylizations or great graphics, there would be more of an incentive to play. Unfortunately, the backgrounds just become a blur as you’re trying to avoid hitting any obstacles. The aforementioned comic book story doesn’t do it any favors either, as you can literally skip over all of them and not really miss anything.

All of these issues would be more forgivable if the game didn’t cost $20. At the best moments of Switch Galaxy Ultra, it feels like a $10 game. Yes, it does feature cross-buy between the PS4 and Vita versions but that doesn’t make either version any better.

Switch Galaxy Ultra has some decent moments, but they are so overshadowed by the issues present that it just doesn’t work. The game just doesn’t seem to respond the way that a twitch-reflex game like this should. The game wants you to move fast but in order to make any meaningful progress without grinding levels over and over again is to move slow. It’s counterintuitive and feels sloppy. With no real identity of its own, Switch Galaxy Ultra feels hollow and, ultimately, like a pointless experience.

A code for Switch Galaxy Ultra was provided to Pixel Related for review.