Often times we get emails containing press releases for random games no one has ever heard of. The majority of the sales pitches, game titles, trailers or gimmicks seem so poorly executed that far more often than not we pass on the opportunity to do a review. Sometimes it’s just abundantly clear that a game is going to be awful. Needless to say, when I saw the press release for a game called “Grey Goo” (an RTS I had never even heard of), I had flashbacks of disappointments like Meridian: New World. But when I clicked on the launch trailer, my jaw dropped. It looked good. We’re talking “Blizzard CG” good.

See? Naturally I just had to check it out. I don’t necessarily believe that better graphics make a better game, but in my experience the more money a company has invested into creating a game the stricter they are about things like quality control. Graphical fidelity then essentially serves as a litmus test for the size of an investment (not just capitally in the funds used to produce videos, but also the care taken in hiring staff competent enough to create those beautiful works, and lastly the level of emotional investment that staff has in the project as evinced by their attention to details). But does Grey Goo stop being good there? Are the developers just relying on eye candy and uninformed consumers while skimping on the actual gameplay? The answer, in this instance, is no.

Grey Goo will feel familiar to RTS fans not only in the existence of three different factions, but in the process of base construction as well. Early stages of the campaign open with the Beta alien race, proceeded later by the futuristic Humans. Both of those races play fundamentally the same, where each build a base off of central hubs or power conduits, adding extensions outwards in Command & Conquer style. There are a few gripes to be had as far as balancing there goes, because the Beta have the ability to air-drop in structures anywhere they have vision on the map, whereas the Humans are limited to the range of physical power lines radiating from their starting base (where said power lines cannot traverse slopes, ramps or hills). While both factions’ Headquarters are locked to their starting positions, the strength of the Humans is consolidated by necessity rather than player choice or strategy. 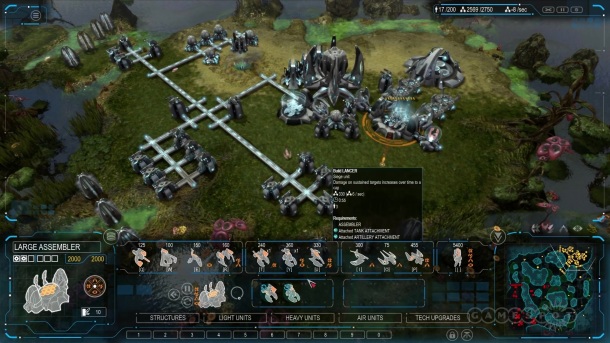 As Beta and Humans war across the plains and eventually come together to fight a mutual enemy, once the third race (the “Goo”) becomes playable, the nature of the game changes dramatically. Grey Goo teases and hints up to this point that strategy and troop management are the real stars of the show, but nowhere is that more evident than with the Goo. The Goo, much like Starcraft’s Zerg, have strength in numbers and mobility. Rather than production queues and building types lining the bottom of the screen as with the other races, the Goo have several slots occupied by active Mother Goos. With one starting Mother you slink across the map to the nearest resource node (a liquid called “catalyst”) and begin to soak up energy.

As with all races, there is only one source of income to manage, where a little counter at the top of the screen quickly tells you whether you’re spending more than you’re bringing in, or making deposits into your bank of constructed silos. The Goo, however, lack that counter, and each Mother you’ve spawned simply grows in size until ready to replicate, dividing off into smaller puddles that each then subdivide into units of your choosing. The whole process is so simple and easily controlled that even semi-skilled players (who don’t live the “clicks-per-minute” lifestyle) can rapidly deploy entire armies across the map without seeing or clicking on a single unit on screen. 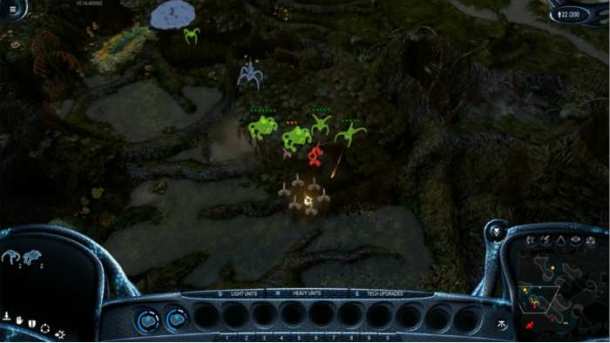 That doesn’t mean the Goo can dominate a match though. In fact one of the more frustrating elements of the game is that because the Goo have no fixed location they can simply run between resource points when down to their last Mother, forcing opposing players to literally camp units on every single resource point across the map; while that’s easy for the Betas who can drop their own refineries at each one, the Humans can spend upwards of an hour hunting down a mobile enemy across the map. Imagine those ending moments of a Starcraft match where you know the Terran have been beaten: without being revealed you’d spend ages hunting down their last floating Command Center.

So, Grey Goo admittedly doesn’t reach the same harmony of checks and balances as other RTS games have perfected over the last decade. But what they have accomplished is incredibly impressive, to the point where I would recommend any RTS fan check the game out. There are a few things that still need tweaking and changing, but for what developers Petroglyph have done to refine the resource collection system alone is worth a look. Ultimately the campaign is conquered in 15 hours or less, but I can see the multiplayer aspect of this game having enough supporters to stay an active community for quite some time. Now all that remains is to see if Petroglyph sticks around for an encore. Here’s hoping.

A code for Grey Goo was provided to Pixel Related for review.