It may only be one year later but already Rockstar is back at it again with a brand new release of Grand Theft Auto V, this time on two new consoles. The new release brings along a complete graphical overhaul, brand new single player content, expanded multiplayer and a bevy of additional cars, guns, music and more. Is all of this enough to justify a return trip to Los Santos? So far it looks like a resounding yes.

The clearest and most obvious upgrade to expect from any re-release on new consoles is graphical enhancement and Grand Theft Auto V does not disappoint in this aspect. The world of Los Santos already was a remarkable achievement when it landed on Xbox 360 and PlayStation 3 last fall and with the Xbox One release this living, breathing world feels even more lifelike. There is a general emphasis on more ambient activity with dogs and cats roaming the city streets, wildlife more common in the country, and an increased number of pedestrians and cars. The draw distance has been improved, which means a lot when you’re careening down the highway or flying in a plane. The most obvious change is in the character models themselves, which look fantastic, especially when you’re right up close. Sure, it doesn’t look quite as good as other current gen games but the improvements are impressive nonetheless. 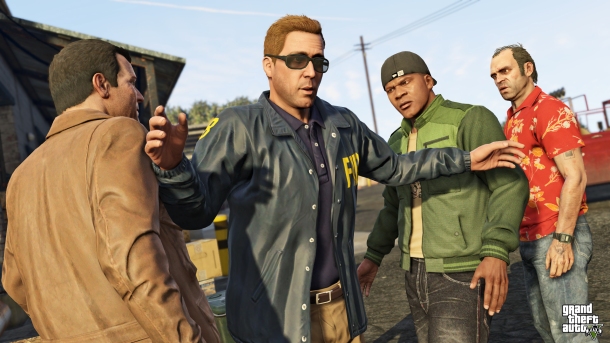 The absolute biggest addition to this new release of Grand Theft Auto V is the first person mode. What could easily have been just a silly gimmick has been fully embraced by Rockstar. Entire sections of the game have been redesigned and re-imagined to help support this mode. First person mode is a legitimate way to play the game and playing in this mode goes even further to show off how much attention to detail Rockstar has put into this massive world. Every building is flooded with details, every vehicle has a realistic, functional interior and shooting has never been so good in a Rockstar game.

Perhaps the most impressive aspect of first person mode is how the game lets you control exactly when and where you use it. At any time you can hit a button to switch back and forth from traditional and first person but you can also set up conditions like always using third person while driving or when entering cover. You can choose different controls that will instantly and seamlessly change as you switch back and forth between the two views. This is incredibly helpful because some aspects, like driving, are simply more difficult in first person, which means you might need to bounce back and forth depending on how you want to play.

This release of GTA also offers some additional content, although not all of it is technically new. Most of this comes in the form of the many updates that have come to the game over the course of the past year. While these were free updates, and mostly multiplayer based, everything is present on day one for the next-gen release. On the multiplayer side you can actually transfer your previous-gen character over, including your apartment, cars and – most importantly – your bankroll. They have also completely revamped the terrible character creation system to include actual customization. Multiplayer plays about exactly the same as it was before and luckily all the bugs and technical issues have been ironed out by now, although the absence of heists is still painful. 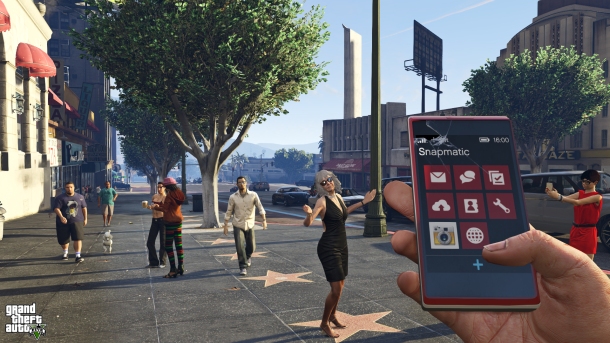 There is, naturally, some completely brand new content, including a wildlife photo challenge, murder mystery side missions, stock car races and weird missions where you literally take control of various Los Santos animals. You’ll also find a ton of new songs on the radio – as if there weren’t already enough – as well as two new radio DJs to experience. None of the new content feels like a huge addition but it does help to highlight many of the new features.

The main reason you will likely be returning to Grand Theft Auto V is to re-experience the campaign once more. Without delving into a full-blown review of the original game I will say that GTA is a fantastic ride from beginning to end. The characters are the best we’ve had in any GTA so far and the multiple character set up is put to amazing use many times, especially the heist missions which stand out as some of the best moments in the game. The story gets a little muddled towards the end and pretty much all side activities outside of the “Strangers and Freaks” missions are pretty poor, but you’ll be content to spend time in Los Santos just for the amazing world that Rockstar built, and with this new release the world is just that much more impressive and immersive. 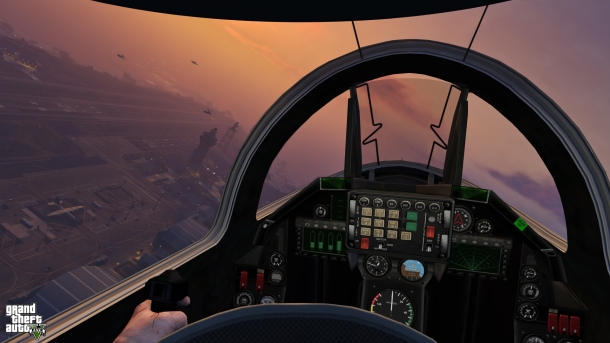 Grand Theft Auto V on Xbox One and PlayStation 4 is really what the original game should have been. There haven’t been a ton of changes to the main game but just the addition of first person mode alone makes revisiting the game worth it. Truly it’s in first person mode that this new version shines the most. It’s just different enough to feel like a brand new experience and serves to highlight the amazing attention to detail that Rockstar has infused in every aspect of the game world. Who would have thought that a simple change in perspective could make such a monumental difference?

A copy of Grand Theft Auto V was provided to Pixel Related for review.