Sunset Overdrive, above anything else, is a game about having fun. You might look at it and think it’s primarily a third person shooter and you’re not necessarily wrong, but really it’s more about having fun moving around in the world. Insomniac has created a game where the entire environment is a playground for you to bounce, grind and swing on. Every single item scattered throughout the city gives you an opportunity to keep moving and while it might look complicated, it’s actually incredibly easy to pull off amazing stunts and put together long chains.

When you are moving around seamlessly, the game is pure joy. It takes awhile for this to come together because the game has to teach you to overcome your natural desire to run around on the ground like any normal third person shooter. It starts slowly by introducing grinding and bouncing but before long you’ll be a pro, pulling off wall runs, mid-air dashes and super jumps. 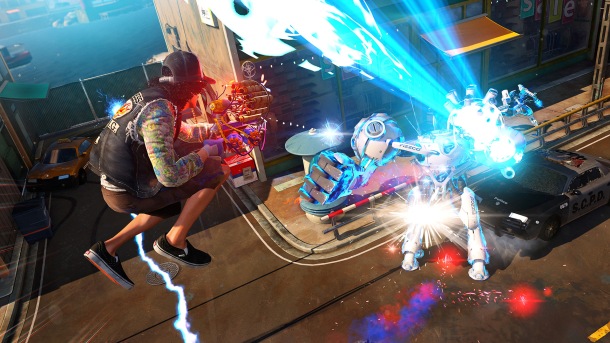 The style of the game also contributes heavily to how much fun it is to play. The premise is plain silly with a giant, evil corporation releasing an energy drink that inexplicably turns everyone into bright orange monsters. The characters you run into in this suddenly post-apocalyptic world are suitably ridiculous, including an adult group of eagle scouts and ninja cheerleaders with Day of the Dead facepaint. More important than the ridiculous nature is how self aware the game is. Characters in Sunset Overdrive constantly break the fourth wall, making references to game mechanics or silly plot devices. It’s an incredibly refreshing style that leads to plenty of moments which are legitimately laugh-out-loud funny; something that is rare in videogames.

Of course, this is still a zombie apocalypse so that means there are plenty of things to kill. Being an Insomniac game, expect tons of crazy weapons to assist you in the slaughter. The weapons are silly combinations of everyday items, reminiscent of the weapons found in Dead Rising. You’ll chuck bowling balls, explosive teddy bears, vinyl records and more, and you’ll need every weapon you can find as the game throws seemingly endless hordes of enemies at you. You will die every now and then but the game doesn’t punish you much. You simply respawn (accompanied by an amusing animation) and continue what you were doing. This contributes to a relaxed atmosphere in that you never really need to worry about enemies, instead focusing on your objective.

With the combination of fun weapons and a great movement system, pretty much every mission is enjoyable. There is a recurring tower defense mission type that starts out a little lackluster, though it gets better as you progress and unlock more traps to use. The highlights of the game are the boss missions, which focus heavily on traversal, and the one-off missions that introduce unique game play mechanics just for that mission. My particular favorite was a mission involving forging a sword that is literally nuclear powered and using said sword to murder hundreds of enemies with ease.

An aspect of Sunset Overdrive that is particularly surprising is the pure amount of content available in the campaign. There are tons of side missions and challenges to complete and almost every side activity leads into character customization by unlocking an article of clothing. Add on tons of collectibles that allow you to unlock various upgrades and you have a pretty compelling reason to spend a lot of time in the world.

If you get tired of running around alone in the world you can jump into multiplayer. Chaos Squad gathers up to eight players and sets them on a variety of challenges out in the world. Generally missions are cooperative but even still you are definitely competing for the best score. Each challenge offers multipliers and bonuses as you lead up to a final tower defense mission with all eight players working together against massive amounts of enemies. It’s a fun distraction that also serves as a good way to level up weapons and earn currency. 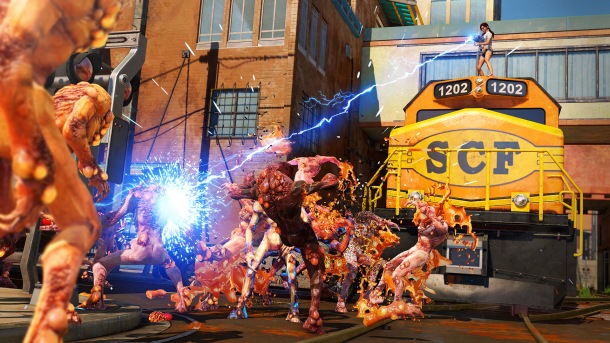 The entire point of Sunset Overdrive is having fun, from the wacky character designs and ridiculous plot to the addicting traversal mechanics and varied missions. When a game focuses almost entirely on making sure that you are constantly having a good time, it’s bound to suck you in, most likely with a goofy grin on your face the whole time.