Sherlock Holmes: Cimes and Punishments is the seventh entry in Frogwares’ adventure game series starring the world-famous sleuth. It is also the first to use Unreal Engine 3. Thanks to this graphical upgrade, virtual Holmes  has never looked this good. That, combined with some solid voice acting, interesting cases and a new morality system, makes Crimes and Punishments the best Sherlock Holmes game Frogwares, or anyone actually, has ever made.

Crimes and Punishments takes place over six different random cases, ditching the series’ history of focusing on one major case per game. All lead to murder in the end but are interesting enough to draw you in. One moment you’re solving a case about a disappearing train, the next you’re looking into the ritual-style murder of a world-famous archaeologist. And just like a good mystery should be, the person (or persons) responsible are rarely who you think.

All cases start off pretty much the same way: you’re summoned to a crime scene where you investigate by searching for evidence and talking to witnesses. Objects of interest are clearly marked and easy to find. Sometimes you’ll have to pick up an object to investigate it a little more closely, but most times Holmes will make a comment about the evidence and store the info away in his notebook. Other times, Holmes’ detective vision (a la the Batman Arkham series) is needed to get a better understanding of what you’re looking at. Without enabling this detective vision you might, for instance, miss the fact that there are scratches on a door showing a break-in attempt. Or you might miss the ashy remnants of something that was burned in a fire. The game gives you an icon when detective vision should be used so there’s no need to trigger it constantly. It’s a bit limited as it stands but adds a layer to investigating that is welcome.

As soon as you meet a new person of interest in a case, you can trigger a character profile mini-game where you can slow down time and learn more about the person you’re questioning. You always know how many things you should notice about a character and some information can come in quite handy for your deductions. That tan line of a removed wedding ring or week old bruising can be brought up in conversation if the person you’re questioning says something about themselves or about the case in general that doesn’t add up. 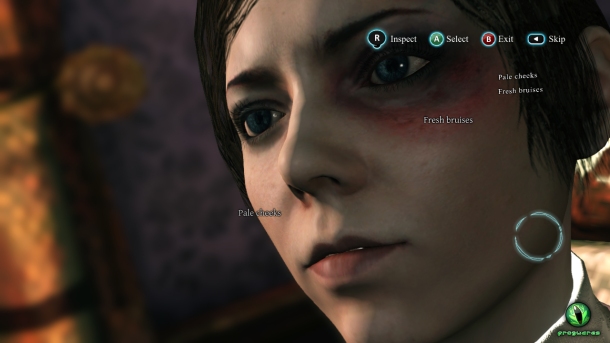 Some evidence will need further investigation. There are times that you will need to reference newspapers in Holmes’ collection or go through his set of encyclopedias. Sometimes a good ol’ fashioned experiment will be needed. Experiments range from figuring out what kind of metal was being burned in a fire to how much strength it takes to throw a harpoon accurately. These will bring up mini-games which are for the most part not too difficult. But sometimes, these mini-games can be so frustratingly hard that you just want to skip them and move along with the story. Luckily, Frogwares lets you do just that if you find yourself overly frustrated.

Every case has a certain number of clues and how you make sense of them is up to you. When two separate clues can be combined to make a deduction on the case, a special icon will pop up. The way you combine all the clues on a case form a tangled brain cloud of sorts that shows a road map towards who the culprit is and why. While there is only one “right” way to combine all the clues, there are other possibilities. This leads to several possible conclusions per case. But if it all seems too simple, then it probably is. It is always wise to continue investigating before accusing someone of the crime, especially if it’s early on in the case. If you’re the type of gamer who absolutely needs to know if you got the case “right,” there is a screen right before you confirm your decision that you can trigger that’ll let you know.

After you make your decision on who is guilty, Crimes and Punishments lets you choose what you’re going to do with the information. Will you send the culprit to jail even though the person they killed was clearly a monster? Or will you sympathize with them and absolve them of their crime? That final choice will be up to you. Different decisions lead to different cut scenes and may trigger a different action sequence. You might have to stop someone from committing suicide or shoot the gun out of a someone’s hand. These action scenes are a nice little way to round off each case and get you looking forward to the next one.

Crimes and Punishments is clearly a step in the right direction for the series. Holmes has never looked this good and having six different cases really makes it feel like The Adventures of Sherlock Holmes by Arthur Conan Doyle: great detective stories with (mostly) satisfying conclusions. While the morality system still needs further fleshing out, it’s an interesting addition to the game. Fans of detective/adventure games will have a hard time finding any better.

A code for Sherlock Holmes: Crimes and Punishments was provided to Pixel Related for review.