One of the most important things needed to make horror stand out is context. When you are playing a horror game, you need to have some kind of connection to what’s happening on screen, be it with a story or with imagery that evokes a story. Without that context, horror can just become a series of jump scares. While this can work in small portions (like the original Slender: The Eight Pages) when that tension is stretched out beyond a short period of time, you become desensitized to scares, to the point where they become meaningless and predictable. This is the biggest issue facing Neverending Nightmares, a game that starts out with a fairy large amount of promise but quickly becomes a boring, lifeless experience.

The plot of Neverending Nightmares is never really given much context. In fact, most of the narrative comes from whichever ending you reach based on your choices in the game. However, the main conceit is that your character is trapped in a never-ending series of nightmares. He can die but will awaken with the world changed in different ways. 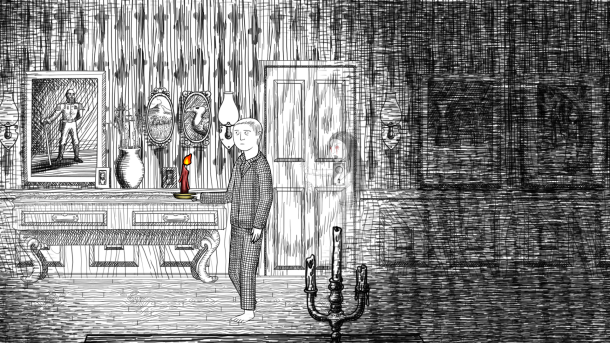 When you first begin the game, this seems like an interesting idea. One area will be closed off and eventually you can find an axe (for example). You’ll die and then wake up with the axe in your room, allowing you to access the new area. However, this is as much as the game seems to do with this idea.

Instead, the game quickly evolves into puzzles that have you trying to avoid the three different monsters. One monster is a creature who looks like a baby who took a ton of steroids. Another is a crazy person in a straitjacket with no eyes. While these designs are interesting, they almost become funny by the end of the game. When you’re being chased by a roided out baby, you’ll laugh way more than you should for what is supposed to be a horror game.

Aside from inappropriate laughs, the main issue of Neverending Nightmares is that there’s so little story being told that it’s hard to develop a connection to your character. There’s no rationale behind the things chasing you, or real connection to your own personal fears, and when the game finally reveals to you what is happening you’ll likely not be shocked but more annoyed. The endings are predictable and frankly, unoriginal.

More than that, though, the game only takes about an hour and a half to complete, where repetitiveness makes even that feel long. You perform the same actions so often that if you skipped the gameplay and just watched all the endings you would not actually lose any of the experience. You will go through a door, see a spooky doll, go through another door, see blood on a wall, rinse and repeat. The game could just as easily show you all it has to offer in a half hour or forty-five minutes.

The one saving grace is that some of the environments are actually pretty good looking. They’re reminiscent of the art from the Scary Stories to Tell in the Dark books, albeit not quite as good. The characters, though, look goofy. Their animations can just look silly at times, especially in the areas where the game forces you to move slowly.

Neverending Nightmares has a fantastic premise but there’s not much beyond that. The demo that was put out for the Kickstarter for this game has some of the best parts to it and that’s a shame. Maybe with a bit more time this could have been great, but unfortunately Neverending Nightmares goes on longer than it needs to and barely does anything in the time you play it.

A code for Neverending Nightmares was provided to Pixel Related for review. 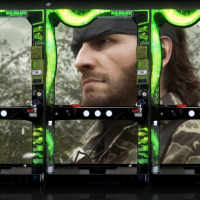