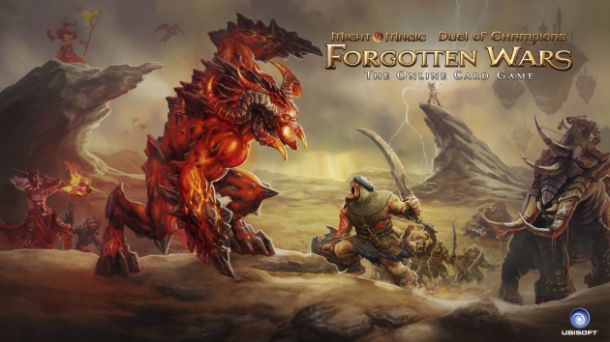 To be clear, Forgotten Wars actually is free, if you’re picking it up on the computer. And also to be clear, the game available on the PC is wholeheartedly deserving of its high meta-score (84 at the time of this writing). The Xbox 360 version however, being the subject of this review, is far inferior in so many ways that it is completely impossible to recommend.

First, we’ll get all the positivity out of the way. Forgotten Wars allows deck building – something it took Magic awhile to get around to. Unfortunately, Magic actually has gotten around to it in their annual iteration, so the thrill there doesn’t last long. And that’s all I have to say about that. Now, on to what’s wrong with this game.

As mentioned, the deck building present on the 360 is a welcome feature, but the way the decks are constructed is immediately hamstrung by Forgotten Wars’ hero system. Rather than have a mysterious wizard (who is you) casting spells and bringing creatures into play, you have a physical hero representing you on the battlefield. This hero has unique abilities, particular spell affinities and a specific faction of cards it can command.

Unlike the PC version (which lets you purchase 12-card packs) on the Xbox you’re limited to spinning a wheel and hoping a good card comes up for purchase. (And just in case you weren’t completely convinced that sounds likes gambling, the spinning wheels even look like a slot machine.) Not only are chances that you’ll get a good card pretty low, but of the two cards you can pick from that don’t require real money leaving your pocket, chances are even lower that they’ll be compatible with whatever hero’s deck you’re trying to build; even if you do get an epic level card, more likely than not it’ll be uselessly incompatible with your chosen hero’s faction.

This inability to take your best cards and make one cohesive, powerful deck from them echoes into the campaign where difficulty spikes early on, making it impossible to progress unless you’re willing to shell out real cash. That invisible pay wall is just the sort of thing gamers both hate and expect from a free to play game, but its presence here is absolutely infuriating due to the fact that Forgotten Wars is not a free game: though you can get it for nothing on the PC, the Xbox 360 version sets you back ten dollars. And what do you get for that heavy initial investment? Instant access to all the starter decks, which are unlockable (but still free) on the PC. Though that alone is enough to say you ought not to play this game, believe it or not Forgotten Wars gets worse.

When it comes to the actual gameplay, the controller interface is cumbersome and ineffective. As you wait patiently for your opponent to take their turn (or wait impatiently, if you’re dueling another human being also struggling with the controls), cards will fly, effects will take place and creatures will populate your graveyard, while you sit cluelessly twiddling your thumbs. There is no feature to stop the action and read the effects of a card that was just put into play – if you want to know what the hell happened, sort through the discard pile on your own turn. 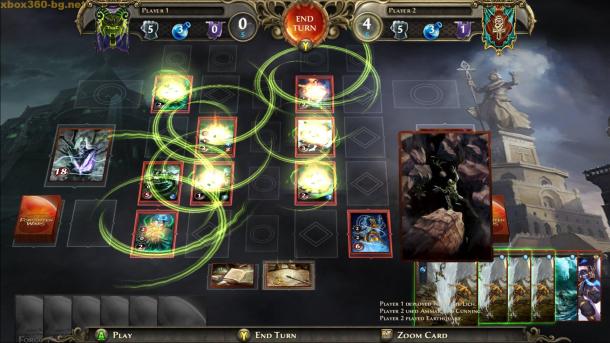 One of the reasons I stopped playing tabletop Magic after the Ice Age set (yeah, I’m old) was the introduction of new and complicated mechanics. But I’ve found that the digital versions of those games are very understanding of the fact that we don’t all necessarily remember what “first strike” and “retaliation” means. Forgotten Wars not only plunges players into a brand new world, but often leaves them completely in the dark. You can have a card in your hand that promises to add poison or weakness counters to particular cards, but literally the only way to find out what those effects do is to play the card and observe the results; even when counters are on cards, all you see are symbols absent of any explanation of what the effect is.

Paying money for the privilege of paying money ought not to sit well with any gamer. For that, and everything else Forgotten Wars does wrong, it’s the sort of game that no one should be playing. The dual-column combat incorporating melee, ranged and flying creatures is absolutely amazing, but that innovation (entirely accredited to the PC version of the game) is completely wasted here. If you have a computer and are into card-battling, I highly recommend checking out the free version of Duel of Champions. If you only game with an Xbox, avoid this one at all costs. For that same price point you can find at least three other games that are far friendlier to new players (and are periodically free with a Live subscription).

A code for Might & Magic Duel of Champions: Forgotten Wars was provided to Pixel Related for review.