Telltale Games made a name for themselves making solid entries in the adventure genre with games like Back to the Future and Sam & Max. But what really put them on the map was 2012’s The Walking Dead, an adventure game that, in addition to the usual genre tropes, features a story that is sometimes brutal, sometimes joyous, but always emotionally effective.

Late in 2013 Telltale released their first title in the post-Walking Dead world: The Wolf Among Us. Based on the popular comic series Fables, it set out to prove that The Walking Dead was not just a fluke but a sign of the quality that we can rely on from Telltale. Many months later we are here at the end of the first season and we can see that Wolf Among Us sits up there with The Walking Dead as an excellent overall experience, one full of mystery, action and plenty of choices.

The Wolf Among Us is set as a prequel to the comic series and centers around the inhabitants of Fabletown, which is a community filled with various fairy tale, nursery rhyme and urban legend characters. Most notable among them is Sheriff Bigby, aka the Big Bad Wolf, who is appointed to keep peace in this new town. A standard day for him will involve chastising toads, a meeting with Snow White and usually a brutal fight against one or two of Fabletown’s more hot-headed individuals.

The main plot centers around the vicious murders of several women, an especially surprising act considering the game emphasizes that Fables are incredibly difficult to kill. Bigby must figure out who is behind the murders and why these women were killed, which ends up being a long, twisted path filled with mystery and deception. The Wolf Among Us twists and turns throughout five episodes, giving you several false leads before the finale, which the game interestingly still leaves open for interpretation. It’s also certainly not afraid to throw shocking events into the plot to keep you hooked throughout and eagerly anticipating the next episode.

Tonally, The Wolf Among Us is a very different game than anything Telltale has done previously. This feels very much like a noire detective story, with somber music and dark, grisly events to investigate. The color scheme is also a nice change from the bland world of something like The Walking Dead. Fabletown is filled with dark alleys and bathed in neon lights throughout the night. The juxtaposition of a fairly normal looking New York City and creatures like trolls, talking pigs, flying monkeys, etc. makes for a game that feels incredibly unique. Each of the characters are well designed and the voice acting is solid throughout as well, continuing the trend of Telltale bringing AAA talent to their episodic vision of storytelling.

As with The Walking Dead before it, The Wolf Among Us is an adventure game through and through and as such the primary gameplay mechanic is choice. Almost every sentence that Bigby utters is decided by the player. The game shies away from simple black and white, good and bad choices and instead offers up varying shades of gray with every decision. Bigby is ultimately a guy who wants to bring a murderer to justice, but how he goes about that and what that ultimate justice actually is, is up to you. You can try to be a smooth talker and a quick thinker, or you can go in smashing places up and literally maiming various characters throughout the game. Depending on your choices you can easily end the game with Bigby having a body count higher than the murderer himself, something the game doesn’t hesitate to bring up. The choices feel meaningful and important throughout each of the five episodes and the game smartly alludes back to previous decisions to make the story feel like your own creation.

Other aspects of the game have been incredibly refined since the first season of The Walking Dead. The action scenes, which consist of simple quick time events, have been seriously ramped up in The Wolf Among Us. The fights between Bigby and the various citizens are gory and savage. While Bigby generally looks like a normal human most of the time, his barbaric animal side comes out the angrier and angrier he gets. Most action set-pieces also have elements of choice infused into them as well, giving you the option of exactly how you want to injure your foes and whether you want to commit horrific acts such as dismemberment or even death. All in all the action is fantastic both to witness and be a part of. The QTEs don’t get too creative or complex but that only leaves you open to enjoy watching the display.

Another aspect of The Wolf Among Us that feels distinct from previous Telltale properties is the actual investigation process. The game isn’t going crazy with pixel hunting or clue gathering; Bigby generally acts more as an interrogator than anything else, although you definitely get to spend time inspecting dead bodies. How you conduct your various interviews with people, whether they be witnesses or suspects, will affect your overall persona. The game also gives you choices as to what path you choose to investigate, often by opening up two or three leads that can be explored, where choices are often mutually exclusive and offer divergent experiences, such as arriving after a crime has taken place instead of before. 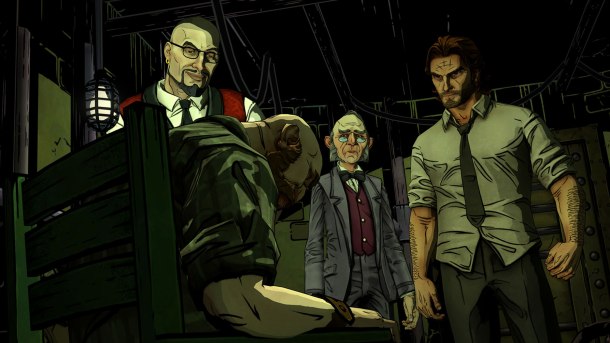 Ultimately The Wolf Among Us is a game that is about story and that means that I will not go into any more detail than I already have. The twisty nature of the plot is a fun ride that constantly keeps you guessing and the final villain the game reveals is unexpected and incredibly complex. The game doesn’t end on a very definite note either, leaving Bigby, and by proxy the player, questioning the events that have unfolded and the choices they’ve had to make. It also offers up one final stinger which doesn’t offer much for what is going to happen next season but is enough to make you think and perhaps go look up some theories afterward.

The Wolf Among Us never hits the emotional depths that made gamers all over tear up during the final episode of The Walking Dead. It still does a good job making compelling characters that you ultimately do care about, it just chooses not to rip your heart out like The Walking Dead’s finale did. The final episode is a bit odd in that the big climactic scene for the entire season ultimately comes down to a bunch of people standing around arguing. It’s an interesting scene in that it does a good job bringing up all of the good and/or terrible things you’ve done over the series. A similar event happened in the finale for The Walking Dead but it’s not handled as well here and feels like an odd way to bring everything to an end. At the very least you get one of the best action scenes in the entire series immediately prior to that, which is an amazing thing to experience.

The Wolf Among Us is an easy game to recommend to almost everyone. It’s a great accomplishment of storytelling to be able to bring together characters like Snow White, The Big Bad Wolf, Mr. Toad and Grendel without being cheesy or silly. In fact the seriousness everything is handled with makes it that much more effective of a tale. The plot is intricately woven to keep you on your toes and have you constantly wanting to know what’s coming in the next episode. Moreover the choices you make throughout feel significant and important and you will end up with a story that feels like something of your own creation. It may not hit as hard emotionally as something like The Walking Dead but what it lacks in that department it more than makes up for in originality and character. It’s a series that thrives on being brutal and bloody but also on being cerebral and thought provoking; something few games can ever hope to accomplish.

A code for The Wolf Among Us was provided to Pixel Related for review.