Insurgency had quite a bit of promise when we previewed it back in September, where the strongest thing the game had going for it was the nice little niche it filled between realistic shooters (such as Red Orchestra) and arcade shooters like Call of Duty. Unfortunately, after some fine tuning, the creators at New World Interactive don’t seem to have capitalized on that potential nearly enough.

The game still features maps and tactical play, with a few more modes having been added, but all still feel like the same old routine. And those that do stand out – such as the cooperative challenge maps – are difficult to find due to automatic server locators not functioning properly (it never finds co-op games, forcing you to search for them manually). 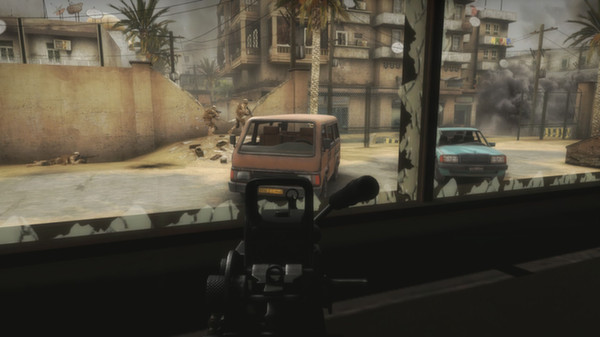 The gameplay itself still forgoes health regeneration for the most part, but where you could take a couple bullets before dropping, things now seem to be slightly more lethal and hardcore. And those respawn times are much lengthier now, as the majority of the modes will require you to wait for your teammates to capture particular objectives before you can rejoin the fight after dying.

Nothing kills the pace of a game faster than making a simple mistake which you then have to routinely pay a five minute penalty for, and this issue is only exacerbated by how easy it is to die. While you can spend some time in the training grounds before setting out to kill or be killed, all Insurgency has to offer is online multiplayer, which is a thing we often criticize the big game companies for adding into an otherwise serviceable single player experience. Perhaps one day we will lambast small companies for including single player content in their rehashed Counter Strike or Half Life mods, saying they’re clearly trying to pad the content, but we are far, far from that day, and here it would have helped the experience.

The maps themselves look far better than what you’d expect from an indie title, though the positive impression the game makes in that regard is more an overcoming of what were already relatively low expectations – the graphics aren’t Crysis remarkable by any means; they’re just a noticeable step up from a free mod.

Really, Insurgency’s biggest issue is that it catered too much to its own base of fans, rather than being willing to try something bold and new. And that itself may have less to do with the developers’ intentions and more to do with the creation process being tied to crowd funding sources like Early Access and Kickstarter. Ultimately, when people shell out in advance for you to make a particular game, not only do they not want to be surprised, but a large part of that consumer group’s satisfaction with the end product is dependent upon feeling as though their feedback was heard.

What this means is that for projects such as this, they are almost bound by the shackles of “expectation,” where a desire to please the fans can stifle innovation. For a brief moment Insurgency really seemed like it could provide a unique offering in gaming world full of indistinguishable first person shooters. And while the failure to live up to that potential may not be entirely the creators’ fault, that doesn’t change the fact that the end product is still an underwhelming entry into the marketplace.

A code for Insurgency was provided to Pixel Related for review.