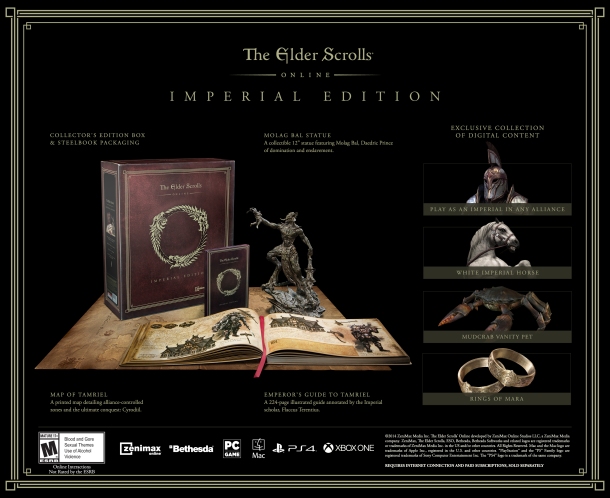 Yesterday we saw the news leak of an awesome looking Imperial Edition of The Elder Scrolls Online. Today, Bethesda has confirmed that it is indeed a real thing.

The Elder Scrolls Online Imperial Edition will be available in both digital and limited physical formats. Both standard and collector’s editions are now available for pre-order through participating retailers and pre-purchase from the game’s newly launched, online store.

In addition to a standard copy of the game, The Elder Scrolls Online Physical Imperial Edition will include:

It is now available for pre-order at the price of $99.99 and is said to be “extremely limited in quantity.”

In addition, all those who pre-order or pre-purchase either the Imperial Edition or the Standard Edition in physical or digital formats will also receive “The Explorer’s Pack” bonus DLC at launch, which includes: Scuttler vanity pet, four bonus treasure maps, and the ability to play as any of the nine races in any Alliance.

The Elder Scrolls Online will be available worldwide on April 4, 2014 for PC and Mac users. Versions for the PlayStation 4 system and the Xbox One are scheduled for release in June 2014.