It’s hard to imagine any game in recent memory that has had as much scrutiny as Double Fine’s Broken Age. One of the first major video games on Kickstarter, Double Fine was able to raise an astronomical (for the time) $3.3 million to fund a, “graphic adventure game for the modern age.” When it was announced that Broken Age would be split into two separate acts in order to sell the game on Steam and to help fund further development of the title, people became skeptical. Why did Double Fine claim to be able to develop this game for their requested $400,000, but when the game raised over $3 million, they suddenly needed more income? Now that the game has been available to backers for a few weeks, it’s easy to see why they want more money and simultaneously difficult to see people being willing to pay $25 for it.

Broken Age is, as Double Fine claimed, an old-school, Lucas Arts-style point and click adventure game. It stars two separate protagonists, seemingly divided by completely different time periods. Shay is a young boy, voiced by Elijah Wood, who seeks adventure and yet is trapped onboard a spaceship designed to keep him completely safe. However, when he is given the chance to escape from his normal routine, he finds that the adventure he craved is not what he had hoped it would be. Meanwhile Vella, on the other hand, is a young girl who is about to be sacrificed by her town in order to appease a dark creature. She rebels and goes on a quest to destroy the evil that threatens her world. The stories, while somewhat stereotypical, are well written and are accompanied by tremendous voice acting.

Being from the Lucas Arts style of adventure games, many of the puzzles won’t have you dying, or even being able to make mistakes. As such, you might expect a different kind of difficulty from the puzzles in Broken Age. However, there is no “rubber chicken with a pulley in the middle” moments. In fact, the puzzles are almost insultingly simple. The game will repeatedly point out things that you need to pay attention to, even when you don’t need help.

Even without these moments, however, the puzzles themselves are incredibly easy. Very rarely do you need to use, “adventure game logic.” That is, logic that only makes sense within the context of the world that you are in. This is a critical part of adventure games and helps develop their world to an even greater extent. Sure, in any normal world it wouldn’t make sense to sword fight with insults, but in Monkey Island it makes perfect sense and helps develop the world. Broken Age Act 1, on the other hand, lacks these critical world developing moments that make games like Grim Fandango and Full Throttle so memorable.

You may notice I’ve avoided explicitly giving examples of the puzzles within the game. This is not only because Act 1 feels criminally short, but in the entire act there are really only about 9 puzzles total that require any amount of thinking. Then, just when you feel like the game is about to really open up with a litany of new puzzles, Act 1 concludes. This is the primary issue that Broken Age Act 1 has: it feels more like a prologue to a much larger game. It introduces the basic mechanics of the puzzles and then just ends. While the cliffhanger ending leaves room for huge growth, taken as a single game, it just feels empty.

However, it is extremely easy to see where the $3.3 million went. The art style is absolutely beautiful and the animations are incredibly smooth. The writing is exceptional in the way that almost all Double Fine games are. Voice acting is top notch and has a huge cast of unique and memorable characters. Everything surrounding the core gameplay is nearly perfect. 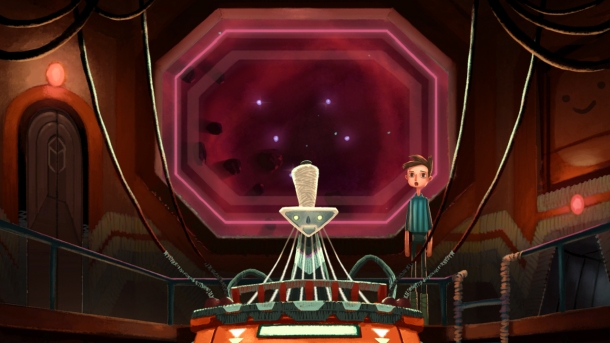 That is what makes Broken Age Act 1 such a mixed bag. If you go into it expecting a difficult, head scratcher of a game, you’ll likely be disappointed. The first act is short and the puzzles are simple. However, the story and the world surrounding it is a marvel to see. As it currently stands, Act 2 will be made available to everyone who bought Act 1. That may be the time to strike on Broken Age because as it stands, it’s a short, almost bittersweet experience.

For the sake of transparency, the writer of this review, Addam Kearney, backed Broken Age on Kickstarter at the $100 level.