Do not buy Dark Matter. Though it’s likely a game you’ve heard plenty of, that’s a result of its infamy. Being one of the only games I’ve personally heard of to be pulled off of Steam as a result of consumer complaints, Dark Matter initially made a name for itself as, “That game that has no ending.”

If you’re unfamiliar with the sordid tale, in essence apparently the game previously just sort of stopped at some arbitrary point and filled in the rest of the story with some text. The publisher blamed the developer for not finishing the product, it came down off Steam and then, a few weeks later, was available for purchase again, supposedly this time with an ending.

I say “supposedly” there because the world – or at least this gamer – may never know. The reason for that is (and this may come as a huge surprise to you) the game that couldn’t originally even be bothered to have been completely finished also, shockingly, is so broken that you can’t finish it. Within the span of three hours I encountered at least two career-ending bugs, neither of which I cared to restart and chance circumventing (more specifics on those a bit later – first I need to let the rage subside). 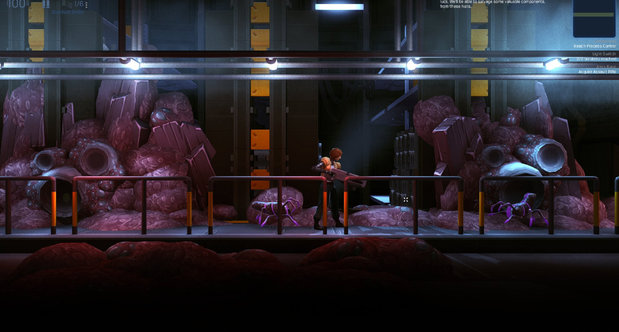 At first Dark Matter seems like such a simple thing, with 2.5 dimensional graphics and a nice little sense of atmosphere, playing as a sole survivor awoken from cryo-sleep by a surprisingly well-voiced AI program. But the enemies don’t move beyond bland and purple, and the controls never move beyond slow and awkward – even with controller support functioning (which is weird, because there are full retail games that don’t even have that feature).

Wandering through the ship is a chore, made more frustrating by the fact that occasionally things like jumping up onto a ledge above you is physically impossible. We’re talking, “I know I am pressing the right button, but nothing is happening; is my controller broken?” territory. Then the checkpoints/save system inexplicably stops working. What’s that? You saw it wasn’t auto-saving, so you saved manually? Nope, you didn’t – regardless of what save was file selected, the game sent me back to the beginning of a large area I had no interest in traversing a second time; even when “one life to live” mode is a deliberate feature in any game I still don’t voluntarily choose it, let alone when it’s forced upon me as a bug.

Perhaps I might have been interested at one point, back when I had some faith that I was going in the right direction, but the first major system to go was the “objective/waypoint” feature. Sure, the game starts out pointing to places on the map and directing you to what part of the ship you should be trudging towards. But after awhile the game just sort of gives up on that, takes a break, and just leaves a little blip on the map for a quest completed what seems like days ago. 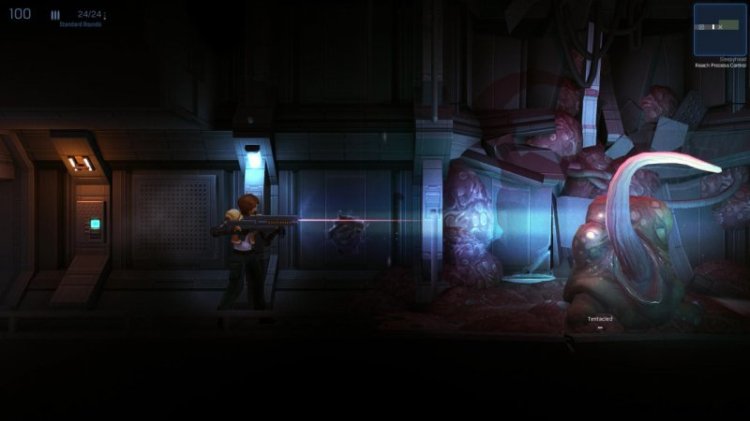 You could spend hours walking around the ship, guessing where to go (presuming that there actually is somewhere to go and the game hasn’t just broken again). Or you could look for Youtube videos with a walkthrough. Either task ultimately yields no results. So, your options at that point are to delete the game and pretend like this whole thing never happened, or admit to all your friends that you wasted money on Dark Matter; a game so bad, that it’s not even, “so bad it’s good” worthy.

Don’t buy Dark Matter. If you need a space-faring alien-killing adventure, check out Alien Breed. Or hell, for that matter try any of the awful Aliens officially licensed games. All of those are a better experience.

A code for Dark Matter was provided to Pixel Related for review.