Telltale Games’ big hit last year, The Walking Dead, blew many people away. From a studio most known for lighthearted fare like Back to the Future and Sam & Max, this gritty, mature tale based on Robert Kirkman’s zombie apocalypse comic was a quite a surprise to most gamers. Perhaps even more surprising than the serious nature was how impactful the story-based, choice-driven game ended up being.

A year and a half later, Telltale is back at it again with another dark game set within a popular comic book universe: Fables. While it drops its inspiration’s name from the title, The Wolf Among Us definitely stands as a great first episode for a series that has the potential to live up to the greatness of The Walking Dead.

Right from the first five minutes it is clear that The Wolf Among Us is going to be a good degree more fantastical than pretty much everything we’ve seen from Telltale titles in the past. You play as The Big Bad Wolf, more commonly known as Bigby. Bigby is the sheriff of an area in New York City known as Fabletown, a place where various fairy tale characters – referred to as Fables – have created a community after being forcibly exiled from their homes. The first episode opens with a conversation with Mr. Toad – in actual toad form – letting you know that you’re in for something completely different.

Being a game that is focused almost entirely on story, I won’t go into many details about what’s going on. As the sheriff, Bigby mostly deals with complaints and ensuring that people are blending in with human society – magic allows even the oddly shaped Fables to appear human. However a vicious murder rocks the community as Fables live for hundreds of years and are notoriously hard to kill. Bigby has to get to the bottom of what is going on, which no doubt is a lot deeper and more complicated than he can imagine.

The story is well told and all of the voice acting is top notch. Just like in The Walking Dead, the main game mechanic is choice. Whether it’s how to respond to someone in a conversation or deciding on the next path of action, choice will ultimately frame your game as well as how the character of Bigby is perceived.

The Wolf Among Us also features a surprising amount of action in it as well, presented in the form of Quick Time Events. Fights are brutal and bloody and even when you are faced with an all-out brawl the game still usually presents choices for how the fight actually plays out.

Other gameplay involves simple point and click crime scene investigation. Bigby will collect evidence, put together clues and interrogate people. Again choice is still the primary motivation, with the game presenting opportunities to catch people in lies or even just attempting to beat the truth out of them. I mean after all, you are the Big Bad Wolf.

Graphically The Wolf Among Us borrows heavily from the style of The Walking Dead. That same hand painted, comic book feel is still present and at times it feels that The Wolf Among Us embraces the comic styling even more. While the graphics may look similar, the tone is decidedly different. The Wolf Among Us is much darker and dirtier. The moody music and the stark contrast of bright neon colors definitely lead to a noire feel that fits the mystery story perfectly. 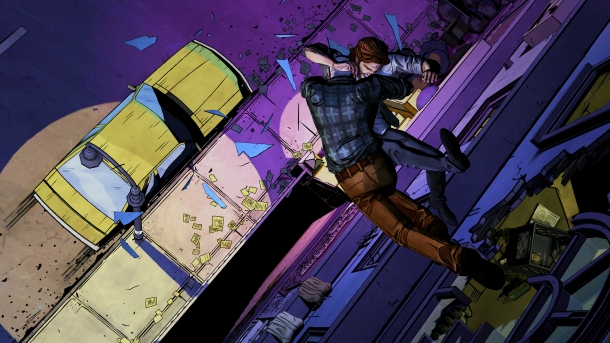 With the huge popularity and critical success of The Walking Dead, The Wolf Among Us’ quality does not land with quite the surprise that The Walking Dead’s first episode did. However the star of the game is clearly the world and characters that you encounter. Running into various public domain figures is always interesting and seeing them played against type in a dark, mature world is fascinating.

The basic fact is that if you liked The Walking Dead then you will certainly enjoy this game. If you didn’t, then this game does nothing all that new to change your mind. All in all, The Wolf Among Us begins with a solid first episode that bodes well for the rest of the season. Also, just as you would expect, The Wolf Among Us’ first episode ends with a brutal cliffhanger that will leave you craving more, which is exactly what you want from a game like this.

A code for The Wolf Among Us: Episode One – Faith was provided to Pixel Related for review.