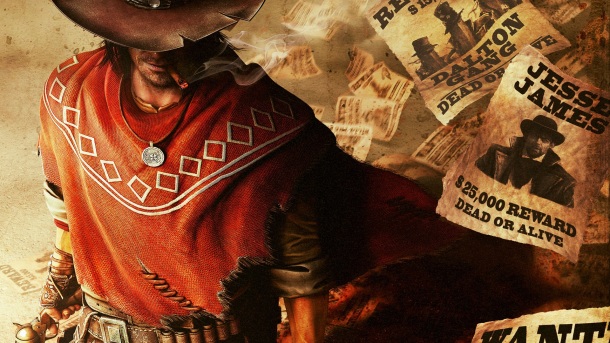 The game’s story focuses on Silas Greaves, a legendary bounty hunter. He enters a bar in 1912 and relates his tall tales to any patrons who will listen. As his tale unfolds, you begin to learn why he became a bounty hunter. Everything he says, though, should be taken with a grain of salt, as it seems that every single major event that ever happened in the Old West had something to do with Silas.

The first person shooter plays fairly similarly to Call of Juarez: Bound in Blood, the second game in the franchise. You still travel from location to location, shooting every single person who gets in your way. You have a somewhat limited arsenal, though, as your main weapons are a shotgun, a rifle and your six-shooter. There are some slight variants of each of these weapons, but you’ll mostly be using one type of weapon in your entire run of the game.

The primary reason you’ll stick with one weapon type is because of new leveling system. There are three paths that you can go down, each focusing on a different type of weapon. These upgrades also give you special weapons, such as an inlaid pistol or a golden rifle. The game also features a New Game Plus mode, allowing you to fill up the entirety of your skill tree.

Returning from other games in the Call of Juarez franchise is the ability to enter slow motion. Once you’ve killed enough enemies, pressing the bumper on the controller will bring you into slow motion, allowing you to kill enemies more easily. The game also turns enemies red, as to ensure that you can more easily see them. This becomes crucial when you’re being pitted against a ton of enemies.

Another component returning to the game is duels. Every so often, you’ll encounter a boss-type fight which will have you attempting to be the fastest gun in the west. You do this by adjusting your right and left analog sticks so that you can quickly access your gun when your enemy draws on you. You can draw before they do, but history will remember you as a coward and you’ll gain no experience points.

The new Sense of Death mechanic also is a major improvement to the series. As you play, a meter will fill in the corner. Once full, if you are about to die and get shot, you’ll have the chance to dodge the last bullet and regain your health. If you dodge in the wrong direction, though, it’s game over. This mechanic is extremely well integrated in the game, and is vastly different than many “Last Shot” mechanics present in games. There are a few instances, though, where you’ll get shot through trees or shrubs and you won’t be able to actually see the bullet coming, making it nearly impossible to dodge.

The shooting itself is spot on, as well. Most of the game is extremely arcady, with experience points popping out of enemies as they go down. There are a couple of times, however, where the aiming can be a bit off. You may have a perfect headshot lined up and will miss with little reason why. In a few sections, enemies can be a bit too difficult to handle and it can lead to some minor frustrations.

Perhaps the most interesting part, though, of Call of Juarez: Gunslinger is how the story itself plays out. While a tale of revenge, like Gunslinger, could be somewhat boring, Silas’ and the other patron’s narration makes the game far more interesting. At one point, he may tell you that he fought a group of Indians and you will be surrounded by them. Then, he will correct himself, saying they were cowboys who fought like Indians, and the Indians will change to cowboys. In other sections, you’ll have no way to escape a situation, Silas will say that a path appeared before him and the area will part in front of you. It’s clever and can lead to some extremely hilarious situations.

Gunslinger also features a Duel mode, where you simply progress through all of the duels in the game without any story, trying to be the fastest person on the leaderboards. There is also an Arcade mode, which puts you into various levels of the game and has you attempting to kill as many enemies as you can, while creating a chain of combos. It’s fun, but this mode doesn’t allow you to bring in your character from the story mode, opting instead for pre-set loadouts. It would be a lot more fun if you could bring over your skills and weapons.

Call of Juarez: Gunslinger might be one of the biggest surprises of the year. Following the dreadful Call of Juarez: The Cartel, Gunslinger is a breath of fresh air and proof that Techland can still make great games. While some minor annoyances plague the game, the latest entry in the Call of Juarez franchise is easily the best.

A code for Call of Juarez: Gunslinger was provided to Pixel Related for review.