Heists are absolutely perfect for video games. Pulling off a successful heist in your traditional blockbuster movie involves planning, stealth, hacking, action, strategy and more, all of which fall perfectly in line with commonplace gameplay in video games. It’s quite surprising that more developers don’t try to implement games based around heists. Luckily with Monaco: What’s Yours is Mine we get a great game that shows just how fun – and chaotic – pulling off a great job can be.

The story in Monaco is told fairly simply but the underlying themes and characters are actually very interesting. It starts out with four prisoners breaking out of jail in Monaco. These four are looking to escape the city but they know they need help, embarking down a path to rescue other characters. However when a group of thieves get together like this, it’s quite difficult to fight your criminal nature, so they end up attempting several heists instead of focusing on their true mission.

The art style with which Monaco is told is something that immediately makes it stand out. The characters are portrayed in simple 8-bit graphics and the effect works well. The action is portrayed from a bird’s eye view with the layout of each level presented as if you were looking at a blueprint. Doorways, windows, lasers, etc. are clearly laid out and recognizable. It’s a beautiful aesthetic that fits perfectly with the theme of the game. The music is also fantastic, with a piano-heavy score that is reminiscent of silent-film, moustache twirling hijinks. 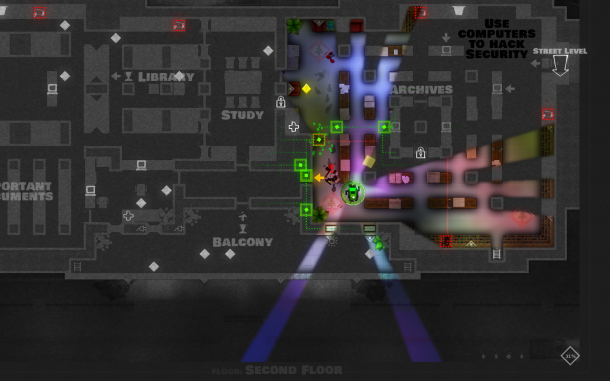 The most impressive thing that Monaco does visually is how it handles lighting and line of sight. Even though you view the game from an omniscient point of view, you can only see what your character can. As you move throughout the level what is lit up is constantly changing based on your cone of view. You also start with the map completely blacked out, meaning you’ll need to check every room and walk around every corner to make sure you aren’t missing anything.

Once a mission starts your objective is fairly straightforward. You usually have to break into a restricted area, swipe some precious object and then high tail it out of there. Along the way you also will pick up loot – represented by gold coins – in the environment. There’s a lot of loot in each level but it’s not essential to completing the stage. Think of it like swiping the silver candlesticks while you’re actually there to steal a Rembrandt.

But the loot is still important for three reasons. The first is that every level is timed, and each piece of loot missed adds ten seconds, which won’t be too big of a deal for those that aren’t leaderboard chasers. The second is that collecting all of the loot in a given level is essential for unlocking the second campaign of the game. Lastly, for every ten pieces of loot you collect you get ammo for whatever ability you currently have. Each stage has its own selection which ranges from weapons to incapacitate guards, bandages to heal, EMPs to wipe out power and more.

The actual gameplay when you are in a level is deceptively simple. You can move freely throughout the world, dodging guards and security defenses as necessary. Whenever there’s something that actually requires complex action, such as picking a lock or hacking into a computer terminal, you simply hold your stick in the correct direction and it will be done. There’s no mini-games or anything like that but every action takes time to complete, leading to many tense moments, like when guards are hot on your tail and you have to stop to climb a ladder into an air duct to escape.

Your experience in each level is also going to be dictated by what character you select. You start with the aforementioned four prisoners but eventually that grows to a roster of eight, each with their own special ability. The different abilities are all drastically different but equally helpful. The Lookout, for example, can detect enemies and loot much farther away and without depending on line of sight, while the Mole can break down almost any wall or object, creating an alternate path or possibly bypassing security. In addition to great gameplay implications, they also present a unique cast of fairly wacky characters that brighten up the story.

When playing Monaco in single player you start by picking one of the characters and getting as far as you can. Should you die, you can continue with a new character. But you only have three lives to complete a level before you must start over completely. Playing in single player is definitely fun but it gets fairly challenging in the later levels. Many situations call for different abilities and you simply may not be able to proceed without triggering an alarm if you didn’t select the correct character. You will be able to complete the game but the greater task of getting all of the loot in addition to just beating the stage is going to be quite a task by yourself.

This leads to what makes Monaco shine the most: it is first and foremost a game to be played in co-op and the co-op is great. Playing with other people not only adds a whole new layer of strategy to the game but it also adds a fun amount of chaos. Now perhaps a well-communicating group of friends can complete some of the missions just surgically going through the level, taking all of the loot and not springing any alarms or traps. However, most of the time that will not be the case and eventually things are going to go bad.

When this happens in single player you just have to run and hope for the best. In co-op, it’s going to happen a lot more often. But much of the time it’s actually quite helpful. If all of the guards are distracted and off chasing someone else, it means that you can probably sneak into a previously occupied area and nab some loot. If one of your teammates should be killed you can simply revive them, although patrolling guards could certainly make this difficult.

You can play co-op in either same screen or over Xbox Live (sadly a combination of the two is not allowed). Matchmaking seems to be well done in that you can either search for people playing the specific level you are looking for or you can just find people with open lobbies to join. You can’t join mid-match, which is a slight bummer but something that is understandable given how the game works. 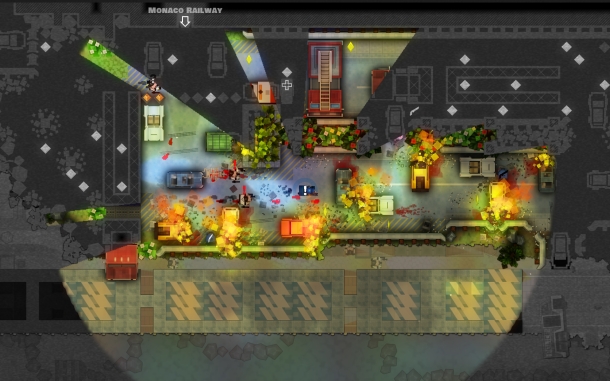 Monaco is a game that is definitely going to take some time to complete if you want to see it all. There are thirty-three levels split amongst two campaigns. You progress through the first campaign in linear fashion all the way to the end. The second campaign is presented as a retelling of the same story but from a different perspective. The levels are similar to the first campaign but many parts have been changed or added. The second campaign is more difficult than the first and provides a fun story to experience. However to unlock missions in the second campaign you need to “clean out” missions in the first, meaning getting all of the loot. It’s going to take some time to see everything but it’s something that you’re definitely going to want to do.

Heists are definitely perfect for video games and Monaco proves it. It brings all of the aspects of heist movies that make them so much fun: a great cast of characters, interesting locations, a healthy mix of cunning, action and stealth, and plenty of fun. It’s a nice ride to enjoy by yourself but it’s something that shines brightest in co-op. Playing with random people leads to a chaotic, exciting experience while getting together with friends could leave you feeling like you’ve just pulled off a heist as smooth as in Ocean’s 11. If you dig playing co-op games, then you simply must check out one of the most unique experiences you will have this generation.

A code for Monaco: What’s Yours is Mine was provided to Pixel Related for review.