Serious Sam: DoubleD XXL is a platformer that returns to the roots of what made the game… actually, no it doesn’t. In a sort of retro chic move, DDXXL eschews its 3D heritage and embarks on what may be considered an alternate reality timeline – one in which the shooter works only as a two dimensional side scroller. The problem is that flattening out the experience has done just that.

The puerile humor, the twisted bad guys and the crazy weapons are “back.” The art style is vibrant and most of the enemies are at least interesting to look at, at first. But shooting endless waves of the same bad guys over and over again gets boring fast. DDXXL suffers pretty significantly from poor pacing, where sections of the different chapters just seem to go on endlessly. Almost as proof of this, the game actually rewards you with an achievement for beating a single chapter in one sitting. 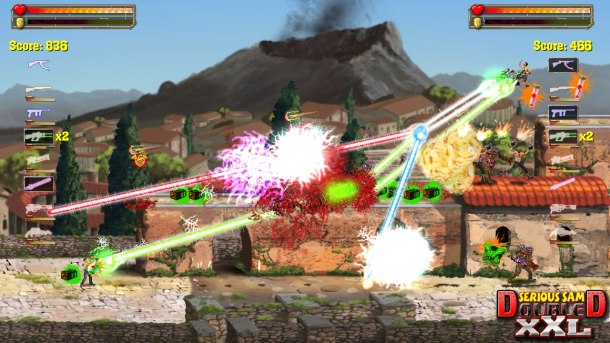 The humor isn’t laugh-out-loud funny, and the voice acting is particularly stilted when it comes to the main character. What serves as the plot of the game is literally completely skippable, as you can hold down a button to fast forward quickly through any of the cutscenes. Granted, you’re not likely to do this at first, but once you see General Maxilla (one of Mental’s commanders) speaking to his “soldiers” for the second time, you’ll be ready to skip everything that follows. The joke is slightly funny the first time someone blows themselves up, or when the Gnarr answer every question with “Gnarr.” But these bland sequences are repeated too often to stay interesting.

The single stellar idea the game offers doesn’t hold your interest for long either. The one good hook here is that all of your guns can be stacked in various combinations, adding purchased special effects. You can attach a money-grubbing chainsaw to a life-leeching laser rifle to a stupor-inducing shotgun to a… you get the idea. And it sounds cool. But once the novelty of that wears off, it’s back to the grind of endlessly spawning enemies whose numbers can outstrip your resources. There are plenty of secrets for completionists to find, but every scrap of armor, health, ammunition or every treasure chest is just an ambush waiting to happen, making it feel almost punishing to wander even slightly. The game does try to throw in some interesting sections, such as a Panzer Dragoon mockup at one point, but for the most part they are just distractions with poorly executed controls.

It almost seems as though DDXXL wanted to be the kind of game that went over the top to give fans an extra, extra large, double dose of Serious Sam. That has to be a good thing, right? As it turns out, the experience feels more like DDXXL sought out gamers who thought they just could never get enough of Serious Sam, only to shout loudly in their faces, “Yes you can!” There are extra challenge levels, cooperative play, leaderboards… basically, there’s insult to the injury. If you are a genuine Serious Sam fan, do yourself a huge favor and stay away from DDXXL – your good opinion of the franchise may depend on it.

A review code for Serious Sam: DoubleD XXL was provided to Pixel Related for review.